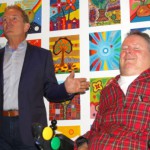 Quadriplegic former racing-car-driver Roger Pedrick, who was injured in a Formula Ford testing accident at Brands Hatch almost four decades ago, has opened the first exhibition of his paintings, Unity in Community, at the Trinity Theatre in Tunbridge Wells.

Pedrick’s quadriplegia means he has very limited movement below the shoulders and as a result he paints with a brush between his teeth. He uses a special rotating easel to compensate for his lack of movement.

He is still a frequent visitor to Brands Hatch, where he has annually presented a trophy to the highest-placed English driver in the Formula Ford Festival since 1978, with notable recipients including Johnny Herbert and Jenson Button.

Despite the difficulties he has faced, Pedrick remains an upbeat character who is proud of his achievements.

“I broke my back at Paddock Hill Bend 37 years ago,” he said. “I always wanted to do motor-racing and I was bonkers about making it to the top and I had a go, but I ended up a quadriplegic, like Frank Williams.

“I spent seven years in hospital and then I had to find somewhere to live and I found a place in Tunbridge Wells, where I have carers to look after me.

“I had something to do to pass the time and I like creating and I like to make people smile, so that’s how I got into painting. The paintings have been building up in my loft and I wanted somewhere to display them.”

He now aims to take his work around the country, and abroad if possible, hoping to inspire others in a similar situation to him.

He said: “Other people are finding it stimulating, exciting and colourful, so what I’d really like to do is take it to other galleries.”

Palmer, who raced Formula Ford single-seaters at the same time as Pedrick, said: “Roger is an inspiration – the way he has gone about his painting is as brave and determined as he was when racing cars all those years ago.

“And the paintings are so good it’s about time they were put on exhibition so that more of us can enjoy them.”

For more information about the exhibition, visit www.trinitytheatre.net.

Facebook
Twitter
Email
Mix
Digg
Previous articleIce Bucket Challenge Continues: What Is It All For?
Next articleExperimental Drug Being Tested at Shepherd Center May Improve Mobility after Spinal Cord Injury