Ice Bucket Challenge Continues: What Is It All For? 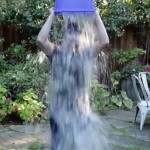 The ice bucket challenge continues but there are many asking what it is all for. The challenge is now reaching other parts of the world, and many have not been fully clued into the reason behind it. Many on Facebook are questioning the mentality of those throwing buckets of ice water over their heads.

While there are now many charities claiming they started it, the ALS Association officially encouraged people to donate money after throwing buckets of ice water over their heads. The water temporarily affects the body’s muscles and nervous system, making it difficult to move limbs and even breathe. These are some of the symptoms that ALS sufferers have, but for the long-term.

ALS stands for amyotrophic lateral sclerosis and affects the spinal cord and brain. It causes the motor neurons to die, causing patients issues when it comes to moving muscles. The muscles eventually stop working because they are not used on a regular basis, and it can lead to problems with swallowing, breathing and speaking. Some patients can end up paralyzed.

The ALS Association continues to look for the reason behind the disease, as well as a treatment. So far, hereditary factors are considered but for the majority of cases there is no reason for the illness to suddenly strike. Millions every year go to the funding of the research but the scientists still seem no closer to the truth. One of the biggest problems is that not enough is going into it and that is due to so few people suffer from it compared to many of the other major diseases and ailments.

It seems the ice bucket challenge started with good intensions but as it continues people are asking what it is all for. The reason behind it has not been shared enough, and it is more of just something fun for friends to do. They throw the water over their head and then nominate other friends. Similarly to the no makeup selfies a few months ago, people wonder whether it is doing the charity any good.

As long as people keep mentioning why, it certainly is. So far, donations have increased considerable. Between July 29 and August 17 last year, donations were at $1.7 million. This year, they have increased to $13.3 million. This is all because people are talking about it and making others aware. Those who choose not to take part in the challenge are encouraged to donate more than those who do take part.

There are some arguments against the ice bucket challenge. The main one is that it was done during the summer months in the northern hemisphere, which is where most people have taken part. It is much easier for people to warm up after the challenge. Some have questioned whether so many people would have taken part in the middle of winter. Most likely not, but that should not take away from the success of the challenge has seen. A number of big names have taken part, including Justin Timberlake and Oprah Winfrey.

While sharing the fun videos, it is important for people to remember why they are doing this. It will stop people questioning what the ice bucket challenge is all for as it continues.

If you would like to donate towards this deserving cause you can do so at the ALS Association website.