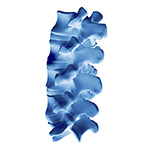 In a study on rats, researchers at the University of Copenhagen have discovered the cause of the involuntary muscle contractions which patients with severe spinal cord injuries frequently suffer. The findings have just been published in the Journal of Neuroscience and, in the long run, can pave the way for new treatment methods.

Three thousand Danish patients suffer from severe spinal cord injuries after being involved in traffic accidents or accidents at work. An injury to the spinal cord is a catastrophe for the individual, and often results in complete or partial paralysis of the person’s arms and legs. Despite the paralysis, several patients experience problems with involuntary muscle contractions or spasms which impair the patient’s quality of life.

The movements are due to the neurotransmitter serotonin, which normally plays a crucial role in relation to our voluntary control of movements by reinforcing the level of activity in the motor neurones when they have to activate the muscles to an extraordinary degree. Research shows that a group of cells in the spinal cord start supplying serotonin in an uncontrolled way following an injury, and this knocks the motor system out of control.

“We now have a qualified idea of why the serotonin level goes out of control, and we have documented that a special serotonin-producing enzyme plays a key role. By targeting the specific enzyme, in the long term we will be able to devise new methods of treatment when we are trying to impact functions in the nervous system,” says associate professor and neurophysiologist Jacob Wienecke.

The prospects of the study are interesting for both spinal cord patients and patients suffering from Parkinson’s disease.

The enzyme aromatic L-amino acid decarboxylase (AADC) plays an important role in the production of the neurotransmitter serotonin:

“In the first few days after an injury to the spinal cord, we can see there is a very rapid regulation of AADC which results in the uncontrolled production of serotonin. It is our guess that this is the spinal cord’s emergency response trying to boost the enzyme’s capacity,” says Jacob Wienecke.

According to the researchers, it may be the same emergency response which causes the involuntary movements – dyskinesia – that are also experienced by patients with Parkinson’s disease. However, for Parkinson’s patients, it is the dopamine system which is affected, but the enzyme which activates the emergency response is the same.

“It is an interesting perspective, which will hopefully focus efforts on targeting drugs specifically at the AADC cells. Perhaps in the future we can regulate the undesired neural activity in this way so that the unnecessary ‘disturbance on the line’ disappears for the affected patients,” says Jacob Wienecke.

Existing forms of treatment for spinal cord patients currently involve, for example, using the drug baclofen, which suppresses neural activity, and thereby the motor neurones which cause the involuntary movements. The problem with baclofen though is that it impacts motor learning – and thus the patients’ rehabilitation. However, there is still a long way to go. Developing new drugs is a protracted process, and the way is paved with obstacles. Injuries to the spinal column are extremely complex, and primarily result in interruptions to the signalling between the brain and the body.

“Finding a solution to the problem is no easy task. However, a lot suggests that regulating serotonin production more precisely could mitigate undesirable spasms while also supporting the rehabilitation of controlled movements. So far, the study has been carried out on rats, but we have reason to believe that the same mechanisms apply in humans,” says Jacob Wienecke in conclusion.

Read the article in Journal of Neuroscience

Quadriplegic working to get people with disabilities outdoors