Amy Van Dyken-Rouen: The Next Adventure 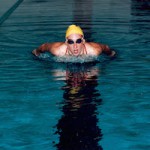 An Olympic athlete and CSU alumna, Amy Van Dyken-Roeun, has recently undergone a new adventure in her life.

Van Dyken-Rouen was involved in an ATV accident on June 6, 2014 leaving her paralyzed from the waist down. A sever in her spine at the T11 vertebrae has posed to be her greatest challenge to overcome.

“It changed my life dramatically, obviously I can’t walk anymore so it changed that,” Van Dyken-Rouen said in a phone interview. “It’s changed my outlook on life. If you can find that little ray of happiness you can dwell on that it will get bigger and bigger.”

This is not the first challenge that Van Dyken-Rouen has had to overcome. When she was six years old she was diagnosed with moderate-severe asthma. Her doctor prescribed swimming to her as a way to open her lungs.

“I had all three types of asthma; exercise induced, allergy induced and infection induced. We found out later that I was actually allergic to chlorine,” Van Dyken-Rouen said. Surprisingly enough, she stated that she has not had any symptoms of asthma since her ATV accident.

Van Dyken-Rouen has incessantly proved herself as a fighter and fierce competitor. That fierceness may have begun while attending Cherry Creek High School.

“My sophomore year of high school I started beating them [teammates] and then they got really mean,” Van Dyken-Rouen said. “My senior year of high school we won state for the first time in five years. I was getting ready to go up to the podium and the team captain grabbed me along with the coach and said, ‘You’ve been up there way to many times. You’re not going up.’”

It was this type of behavior that began to drive Van Dyken-Rouen towards her love of proving people wrong.

Van Dyken-Rouen, also an alumni of the CSU swim team, said she had a much better time in college. “My team at CSU was amazing. They were nothing but warm, nothing but welcoming. I still keep in contact with a lot of the girls.”

Van Dyken-Rouen was not planning on swimming when she came to CSU. However, John Mattos, head coach of the CSU swim team at that time, convinced her otherwise.

“Mattos told me to give him a semester and if I didn’t like it he would pay for the rest of the year for me,” Van Dyken-Rouen said.

Van Dyken-Rouen qualified for the 1996 Olympic trials while attending school at CSU. Later on, she went to the Olympics and took home four gold medals, making her one of the most decorated female Olympic athletes in a single summer games.

“Having the national anthem played for something that you did is probably the greatest feeling that someone could imagine,” Van Dyken-Rouen said. “If I could bottle it, I would make a bazillion dollars.”

Van Dyken-Rouen has had a will to succeed her whole life and now has new goals. “The thing with spinal cord injuries is that they can’t tell you a prognosis,” Van Dyken-Rouen said.

She believes a cure is out there and it very well might be stem cell. “Some people don’t realize that if we find a cure for spinal cord injuries and get people like myself walking again then we find a cure for ALS (Amyotrophic lateral sclerosis), Parkinson’s and Alzheimer’s,” Van Dyken-Rouen said.

Amy Van Dyken–Rouen and her husband Tom Rouen, former punter for the Denver Broncos, plan to partner with a couple of groups and charities to help other people with similar spinal injuries.

Van Dyken-Rouen said she would “like medical companies and members of Congress to see what we can do about getting stem cell research working in the United State and get cures for all of these things.”