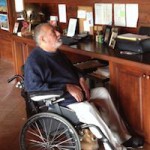 “Shooting from the lip” is no joke for farmer Clyde Thomas when he embarks on a quest to shoot deer and feral animals from his home just south of Eden on the New South Wales far south coast.

The 61-year-old quadriplegic has to use his mouth to fire a gun.

Mr Thomas was paralysed from the chest down as a result of a car accident in which he was a passenger in 1989.

He explains that it usually takes just over a month for him to prepare for a hunting trip.

He uses a modified, camouflaged wheelchair with a cradle-mounted rifle which is triggered by a rubber tube mounted to the left of the gun stock.

Mr Thomas uses a ‘mouthstick’ to position the rifle and sucks on the tube to fire the weapon.

Underneath the chair is a motorcycle battery which powers two 12-volt motors which drive a shaft.

“As the shaft rotates it lifts up a block which raises the rifle up or down,” he explained.

“When it is time to shoot, I suck hard on the vacuum switch, it makes the connection, fires the solenoid which pulls the trigger and the rifle goes bang!” he said.

“I’ve got to brace myself as I take the full recoil in my bone-thick head!”

The mechanics are the result of many modifications made by Mr Thomas over the years, drawing on his skills from a previous career as a welder for oil companies and construction firms.

“I was in hospital when the [abalone] license came up and managed to raise the funds from the hospital bed somehow and got that up and going,” he said.

“We put everything on the line and borrowed the money and I still have that abalone license today and lease it out.”

He continues to operate the farm and abalone license in partnership with his wife Jennie and his two daughters.

His brother is involved along with his full time carer Michael Cordell, who apart from working on the farm, is a keen hunter.

The two are very much a part of the expeditions when it is time to head out and bag a deer.

Mr Cordell says, “it’s great. I love going out and trying to find the animals, locate it and try to get close enough to it so that Clyde can get an accurate shot. That is three quarters of the battle.”

“We have had discussions in the past over distance and where to shoot the animal, but most times Clyde gets his way!”

Driving to the spot where there have been sightings of deer, the trio mount a vigil which can last up to ten days.

I set up a screen of broken timber and bits and pieces,” Mr Thomas said.

“I camo’ up myself with all sorts of camouflage.

“I get sticks and branches sticking out of my wheelchair to break up my profile.

“I look every bit as I can like a big pile of sticks.

“My brother and Michael then put my rifle rack onto the wheelchair. Then we sit and wait.

“It’s a quick process. I can shoot remarkably fast with it and I am incredibly accurate. It has taken me years and years.

“Because of the recoil I have got it right down pat. I don’t fire a lot of bullets I don’t need to.”

Wild boar, buffalo, wild goats and deer of all sizes are mounted on the walls of a large trophy room at Mr Thomas’ farm.

From a wheelchair, actor, athlete and now sailor