To walk again – the people behind the story 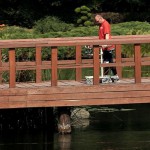 It is a moment I will always remember. On a warm summer’s day in Wroclaw, Poland, Darek Fidyka walked across a bridge, using only a frame for support.

This had been his dream for four years, after he was paralysed in a knife attack. Now, after a transplant of cells taken from his nasal cavity, it had become reality.

He is the world’s first patient to receive the groundbreaking treatment.

Behind those few steps lay the extraordinary efforts of a group of scientists, surgeons and fundraisers in Britain and Poland.

Prof Geoff Raisman, of UCL, has spent his career pursuing the dream of spinal cord regeneration. Nearly 30 years ago he showed that nerve cells in the lining of the nose constantly renew themselves.

In animal studies, he demonstrated that paralysis in rats could be reversed by a transplant of specialist cells known as olfactory ensheathing cells (OECs).

Now, finally, he has achieved partial success in a patient. He said: “To me, it’s the triumph of an idea, one that has taken a long time.”

Prof Raisman said: “It would be my proudest boast if I could say that no patient had had to pay one penny for any of the information we have found.”

Dr Pawel Tabakow heads the Polish team of scientists in Wroclaw responsible for making the leap from animal research to humans.

As a medical student, he had been inspired by Prof Raisman’s work. Dr Tabakow was so convinced of the science that he got ethical approval to inject OECs from the nasal lining into the spinal cords of three paralysed patients – this was crucial to show the procedure was safe. None suffered ill effects.

The next patient was Darek Fidyka. Before surgery, Dr Tabakow insisted Mr Fidyka underwent eight months of gruelling physiotherapy, in order to test whether there was any chance of a spontaneous recovery.

He performed delicate surgery to open the skull in order to remove one of Darek’s olfactory bulbs, at the base of the brain, and a second operation to expose the damaged spinal cord and transplant the cells.

For future patients, Dr Tabakow is pioneering a new technique to remove olfactory bulbs through the nose – a far less invasive procedure.

In Darek Fidyka, the scientists found the final, vital member of their team. He was paralysed from the chest down after being stabbed in a frenzied attack by his partner’s ex-husband.

Mr Fidyka said he had always been determined to recover.

He said: “I knew it would be difficult, and it would last long – but I always shut out the thought that I could be in a wheelchair for the rest of my life, so I was always set to fight hard.”

He has had to show dedication and determination over the past two years. He spends five hours a day, five days a week having physiotherapy. The physical and sensory gains he has made have been hard won and slow to surface.

Mr Fidyka has already spent more than two years at the spinal rehabilitation centre in Wroclaw. A further year or two of rehabilitation may be needed if he is to get the full benefit from his transplant.

David Nicholls son, Daniel, was just 18 when he was paralysed in a swimming accident on Bondi Beach in Australia.

At his bedside, David made him a promise. “I held Dan’s hand and said, ‘We’re going to make you better, we’re going to fix you,'” he said.

Mr Nicholls is a chef and began by publishing a book of menus to which many of the world’s leading chefs contributed.

It made about £400,000 for his charity, the Nicholls Spinal Injuries Foundation, which has so far raised more than £2.5m.

None of that money has been used to treat Daniel, but rather to pursue the dream of a cure for paralysis.

It’s not clear whether Daniel’s spinal cord injury would make him a suitable candidate for any future clinical trial, but he said: “The biggest gift anybody could give me would be to be able to walk again, and you always live in hope of that. I believe this [research] is the first step in doing that.”

It must be stressed that the results of one patient are not adequate evidence that this cell transplant therapy works. All the scientists involved are keen not to raise false hopes.

The procedure must be successfully repeated in other patients, in a clinical trial. That is likely to take many years – only then will it be clear whether this marks a new era in the treatment of paralysis.