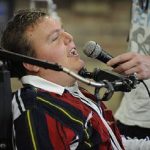 In a hurry to get to his friend’s house after school, the then six-year-old didn’t check before stepping out to cross the road.

He was hit by a car and broke his neck, sustaining the worst spinal injury possible.

Diagnosed as a C1 quadriplegic, he was paralysed from the neck down.

Now, aged 29, he uses his chin to guide his wheelchair and needs a full-time carer.

Mr Bartl tells his shocking story on a regular basis, in the hope it will make teenagers realise the potentially devastating consequences of just one bad decision.

He recently addressed students from six different secondary schools including Rowville, Monbulk and Upwey, at a seminar in Belgrave Heights.

The session was part of the RACV’s SpinChat program, run in conjunction with Independence Australia.

This scheme involves young people with spinal-cord injuries speaking to students who are in the high-risk category for reckless driving. Research shows 15- to 24-year-olds are at the greatest risk of a spinal-cord injury.

Mr Bartl urged students to think before they act.

“It was just one wrong little decision and my life has been turned upside down,” he said.

Despite the barriers he faced, Mr Bartl has completed three university degrees, including a Bachelor of Media Studies, and also plays wheelchair soccer and volleyball.

Mr Harrison became a paraplegic when he was just 17, after diving into a river without checking the water level and hitting his head.

He told the teenagers to think about decisions they made each day, especially the consequences of dangerous driving.

“You guys have to realise when you get behind the wheel, and you speed, you put everyone else around you at risk,” he said.

After representing Victoria in wheelchair rugby, he is aiming to make the Australian team at the Paralympics in London in 2012.