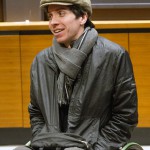 A cycling injury that rendered him a quadriplegic nine years ago also inspired Jonathan Sigworth to create an organization that helps people with spinal cord injuries in India live fuller lives. A self-described disability advocate, filmmaker, and social entrepreneur, Sigworth shared his story with students during a December 2 talk sponsored by the Christian Fellowship club.

Sigworth is co-founder of Empowering Spinal Cord Injured Persons (ESCIP) Trust India, a nonprofit organization based in Delhi that uses wheelchair rugby as a therapeutic tool and provides a transitional living program to quadriplegic patients. The organization relies on a peer mentoring approach. “Our goal is to get quadriplegics to think of themselves as whole people again, independent and able to find jobs and live in the community,” said Sigworth.

Sigworth was 19 and a freshman at Wesleyan University when, during a gap year program in India, he lost control of his bicycle and plunged off a 70-foot cliff in the foothills of the Himalayas. Sigworth credits his Christian faith for helping him cope with disability and find a new and redeeming purpose in his life. “These challenges we have can bring about amazing things,” he said. “When terrible things happen to you, you’re being equipped to deal with a new subset of people. Our greatest gifts can come from our greatest nightmares.”

When he was injured, Sigworth said, he felt keenly his privilege as an American citizen with medical insurance and access to top-notch rehabilitation facilities. He wanted to do something to improve the situation in India, where—as in much of the world—rehabilitation techniques for quadriplegics are largely unknown. In India, more than 1.5 million people are living with a spinal cord injury, Sigworth said.

After rehabilitation in Connecticut, Sigworth returned to the India Spinal Cord Injuries Center in Delhi, where he had been treated, to mentor patients in the exercises that helped him regain an independent lifestyle. He also introduced the game of wheelchair rugby as a way to break stereotypes about quadriplegia, explaining that the sport fosters mobility, health, and a sense of community. Sigworth also shares the sport in Connecticut by volunteering at Gaylord Hospital in Wallingford.

Playing a highly physical game helps quadriplegic patients to understand their own capabilities. “Just because you’re in a wheelchair doesn’t mean you’re a fragile person,” Sigworth said. “That’s the message we bring. It doesn’t mean you can’t take control.”