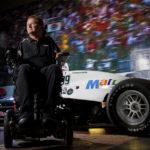 When Sam Schmidt began to prepare his remarks for his Southern Nevada Sports Hall of Fame induction ceremony on Friday, he struggled.

The race car driver and owner knows it’s his accomplishments on the track that qualified him for the honor, but that’s not the only legacy he’s hoping to leave. At least not since his crash on Jan. 6, 2000, at Walt Disney World Speedway that rendered him a quadriplegic.

“I really feel longer term, what I hope to be known for is more what’s happened after my injury,” Schmidt said. “The whole idea of overcoming adversity and moving on. I wouldn’t wish this injury on anybody, but I truly feel now, 17 years later, that I have helped thousands more people than I ever could have being a race car driver.”

Schmidt began thinking of ways to give back while still in the hospital after his crash, thoughts that eventually formed Conquer Paralysis Now, a project of the Sam Schmidt Foundation that supports spinal chord injury research. The foundation recently had its 18th annual fundraising gala at last week’s Indianapolis 500, where Schmidt’s team, Schmidt Peterson Motorsports, had three cars racing.

The idea behind the foundation started as Schmidt received cards from fans and people involved in motor sports while hospitalized. He realized others recovering from spinal chord injuries didn’t have the support system he did.

In the past 18 months, Conquer Paralysis Now has donated more than $1.2 million to institutions such as the Indiana University School of Medicine and the UCLA Neurobiology and Neurosurgery Center to fund spinal chord research, according to executive director Craig Williams. The organization also works with Paralyzed Veterans of America, helping with research and quality of life grants to get injured veterans necessary equipment such as wheelchairs.

It also carries a personal touch: Athletes who have been injured or paralyzed sometimes call in hoping to reach Schmidt, and he usually gives the same advice. When it takes 2 1/2 hours to get out of the bed every morning, as it does for Schmidt, you need to find something you’re passionate about to make that worthwhile.

“He’s a tremendously inspirational and inspiring figure for people,” Williams said. “(People) in all situations of life, but particularly those dealing with and trying to overcome setbacks.”

Schmidt is still driven to have one of his cars win the Indy 500 or an IndyCar Series championship. But he calls those goals the “sprint races” of his life. His “marathon” is treating spinal chord injuries.

“His energy, it really sometimes puts the rest of us to shame,” Williams said. “He drives me and others.”