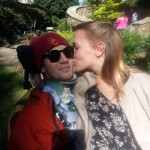 ATLANTA — The following is one man’s experience, through two parallel stories.

The first story is of a swimmer named Dillon Connolly, a record-setter at Sprayberry High School in Marietta and the University of Southern California. He qualified for Olympic trials and then decided to train professionally.

Then in September, he had an accident.

“I remember everything,” Connolly says. “I dove into a wall of sand, basically.”

Connolly was surfing with friends this summer and crashed into a sandbar, fracturing vertebrae in his neck.

“I was lying face down in the water floating there,” he said. “I couldn’t figure out how to move my body, and then I realized, ‘I actually don’t know how to move anything.'”

He is currently pushing through therapy at Shepherd Center, accepting the unknown road ahead.

“You took everything for granted,” said Connolly. “Like, I haven’t been able to scratch my face since the accident.”

The second story is the same, only this time with a new character: Connolly’s girlfriend, Kerry Sheridan.

The pair met earlier this year and immediately embarked on a relationship filled with numerous outdoor adventures.

In Connolly’s current state, his girlfriend has been a guiding force in many ways.

“My mom is a partial C-5, complete C-6 quadriplegic,” said Sheridan. “But she drove me to all my sporting events and came to all my track meets, and it wasn’t a big thing; it was all normalized.”

“She was more than reassuring that she loves me more than anything for me,” said Connolly. “Besides my parents, I have never received that much love from someone.”

So there are two stories here: the story of a once-fearless athlete now coping with his new reality, and the story of a young couple facing this reality with unquestioned love.

Says Sheridan, “He still has his humor and his intelligence and his good intentions, and all of the love he’s always given … and that’s what I fell in love with.”

The situation has drained the couple and their families of much of their finances. If you would like to contribute, please check out their HelpHOPELive page.

A laurel wreath for Jack