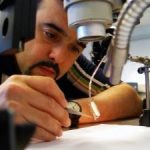 A new wireless device to help victims of spinal cord injury is receiving attention in the research community. Mesut Sahin, PhD, associate professor, in the department of biomedical engineering at NJIT, recently has published and presented news of his findings to develop micro-electrical stimulators for individuals with spinal cord injuries.

The work, now in its third year of support from a four-year, $1.4 million National Institutes of Health (NIH) grant, has resulted in the development and testing of a technology known by its acronym, FLAMES (floating light activated micro-electrical stimulators). The technology, really a tiny semiconductor device, will eventually enable people with spinal cord injuries to restore some of the motor functions that are lost due to injury. Energized by an infrared light beam through an optical fiber located just outside the spinal cord these micro-stimulators will activate the nerves in the spinal cord below the point of injury and thus allow the use of the muscles that were once paralyzed.

This past September, The Journal of Neural Engineering published the first testing in animals. “Our in vivo tests suggest that the FLAMES can be used for intraspinal micro-stimulation even for the deepest implant locations in the rat spinal cord,” said Sahin.

“The power required to generate a threshold arm movement was investigated as the laser source was moved away from the micro-stimulator. The results indicate that the photon density does not decrease substantially for horizontal displacements of the source that are in the same order as the beam radius. This gives confidence that the stimulation threshold may not be very sensitive to small displacement of the spinal cord relative to the spine-mounted optical power source.” Sahin spoke about this work at the IEEE Engineering in Medicine and Biology Conference in Boston, also in September of 2011.

FLAMES is a semiconductor device that is remotely controlled by an optical fiber attached to a low power near-infrared laser. The device is implanted into the spinal cord, and is then allowed to float in the tissue. There are no attached wires. A patient pushes a button on the external unit to activate the laser, the laser then activates the FLAMES device.

“The unique aspect of the project is that the implanted stimulators are very small, in the sub-millimeter range,” Sahin said. “A key benefit is that since our device is wireless, the connections can’t deteriorate over time plus, the implant causes minimal reaction in the tissue which is a common problem with similar wired devices.”

Selim Unlu, professor of electrical and computer engineering at Boston University, is working with Sahin. “We hope that once FLAMES advances to the clinical stage, patients paralyzed by spinal injury will be able to regain vital functions,” Sahin said.