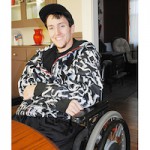 When Kyle Lamey broke four vertebrae in a car accident, leaving him paralyzed from the neck down, he was told he would likely never be able to breathe without a ventilator.

Three years later, Lamey is not only breathing on his own, but he’s able to move his upper body and arms, and drive a car.

He says no one is able to explain why he’s been able to recover to this extent.

Lamey’s accident took place in Sutherlands River in December 2011 when he was a Grade 11 student at North Nova Education Centre. “We went around the corner and lost control and went into a telephone pole,” he says.

“I was paralyzed from the neck down. I had broken the C3, C4, C5 and C6 vertebrae in my neck. They said I should have died instantly.”

After the crash, Lamey was taken to the Aberdeen Hospital and then airlifted to the Halifax Infirmary, where he spent the next seven weeks. He had a tracheotomy and underwent surgery to stabilize his spine. Once he was recuperated enough, he was transferred to the Nova Scotia Rehabilitation Centre, and then in February 2012 he was flown to a hospital in Philadelphia that specializes in spinal cord injuries.

He spent five weeks at the Shriners Hospital for Children, which was founded with the aim of providing expert medical care for children with no financial burden to the patients or their families. In the United States, the Shriners Hospitals were the first spinal cord injury rehabilitation centres designed specifically for children. Their ground-breaking research has led to innovative treatment techniques, providing care that helps patients recover to the greatest extent possible.

“Typically it would be six to nine months from start to finish, but I was there (in hospital) for a total of only 93 days,” he says.

He has been back to the Shriners Hospital five or six times since for follow-up appointments and can continue receiving treatment there until he turns 21, at which time he will be considered an adult.

Now 20 years old, Lamey is extremely grateful for the care he’s received there, especially since not many local doctors are experienced with his condition. “It’s hard to find doctors around here who know about spinal cord injuries.”

While he spent less time in the hospital and rehab than was expected, it was still an arduous process involving many different types of therapy, including electrical stimulation, range of motion work and stretching, all with a focus on improving function and independence.

Lamey had to relearn many everyday tasks such as how to speak and how to move his arms.

“When I first started to move my arms, it was uncontrollable movement. I would think about moving my arm and it would move in a direction I didn’t want it to. I was like a toddler, learning to control them. It’s very hard to relearn fine motor skills, but it’s getting better,” he says.

He couldn’t speak after the accident and had to communicate by blinking his eyes and using an alphabet board. “I had to blink my eyes to spell out all of the words.”

Lamey says it could sometimes take half an hour to put together one sentence.

One day he got frustrated with the process and asked for his cellphone. “People would text me to ask how I was, so I typed away and learned to do it. It took time, but I got faster.”

In September 2012, less than a year after being injured, Lamey returned to school. He had finished his Grade 11 year at home and entered Grade 12 at NNEC. After graduating, he attended the Nova Scotia Community College, studying Human Services. But after one year, he decided it wasn’t the right fit for him. He’s now planning to apply to take business courses next fall.

“I eventually want to start my own business. I want to open a garage and hire mechanics. That’s what I wanted to do before the accident – small engine repair and get my mechanic’s papers – but life changes,” he says. “I like working with cars – it’s my passion. I still do it now.”

He attributes his progress to several things – personal resolve, therapy and the help of others, including the Shriners Hospital and those who held a benefit for him which enabled the purchase of therapeutic equipment.

“It’s determination – not giving up. I just refused to believe what they said. My parents were the same – they told them they didn’t want to hear it (when doctors were negative about his prognosis).”

Lamey uses an exercise bike that provides electric stimulation to the paralyzed muscles in his legs to prevent muscular atrophy. He also uses similar devices for his hands. And he has a tilt table that allows him to put weight on his legs, which keeps the bones strong and prevents degeneration. He spends one to two hours a day using the apparatuses.

“I wouldn’t be even close to where I am today without all this equipment,” he says. “They did a benefit for me when I got hurt and we put a lot of the money toward the equipment.”

The fundraising dance was organized by parents whose children attended Playtime at Dodie’s, the daycare owned by Lamey’s mother. The group of parents had heard about the situation and wanted to help.

When he first came home from hospital, Lamey lived with his parents in Priestville. Now he’s living in New Glasgow with his fiancée, and his brother. He plans to get married next fall and the couple just purchased his grandmother’s house, as she’s relocating. Once modifications to the house are complete, they will be moving there.

WHERE ARE THEY NOW BY CAROL DUNN

Where Are They Now? is a monthly feature that seeks out former newsmakers from Pictou County. Carol Dunn is a freelance writer, and former newspaper reporter and editor, who lives in New Glasgow.