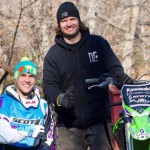 One year after he injured his spinal cord, Bruce Cook says he has come a long way

Motocross stunt rider Bruce Cook has taken to old adage “once you fall off the horse; get back on” to heart.

The 27-year old from Kelowna injured his spinal cord while attempting a new world record for a double front flip last January.

Cook told Daybreak South’s Chris Walker he can’t feel anything below his naval, but a friend helped him modify his bike.

“We put kind of a cage around my legs, and a little bit of a seat to hold me in place, and a seat belt actually to keep me in place,” he said.

He said he started practising the double front flip again. He’s also been doing jumps, and in November, he landed a back flip.

“That was kind of a goal of mine ever since the first day of injury.”

Cook is also working to get the use of his legs back. He spent four months at the Project Walk recovery centre in California, where he was able to use braces to help him stand up, and worked with specialists to retain the muscle in his lower body.

“It’s been a pretty crazy year. Definitely some of the highest highs and lowest lows of my life, but overall I’ve had really amazing recovery.”