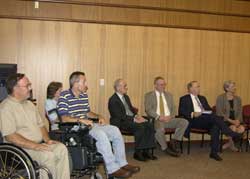 LOUISVILLE, Ky. – An experimental therapy that combines stem cells and gene therapy to repair spinal cord injuries in rats may lead to a new way to treat the same injury in humans.

The therapy, described in the July 27 issue of the Journal of Neuroscience, shows significant potential for repairing the spinal cord by regenerating a protective coating on the nervous system, said lead researcher Scott Whittemore of the University of Louisville.

Injuries to the spinal cord can damage Myelin, a coating that protects the nervous system much like the insulation around an electrical cord. When myelin is damaged or destroyed, the nerves surrounding the spine cannot adequately conduct signals to and from the brain. 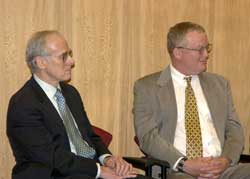 Whittemore found that stem cells grafted onto damaged spinal cords in rats can develop into cells that make myelin, which in turn grows and migrates to the damaged tissue. The new cells grow even faster when combined with a gene therapy that boosts production of two substances that help nerves survive and mature, he said.

“The key word here is ‘combination,’” said Naomi Kleitman of the National Institute of Neurological Disorders and Stroke. “This is one of a series of new studies showing that a combination of therapies is needed for successful spinal repair.”

Since 1998, Whittemore and other faculty at the Kentucky spinal cord research center have received more than $32.5 million in research support aimed at developing new ways to repair spine injuries.

Everett thanks high school for support at football banquet