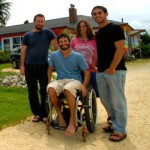 Arnon Amit from Israel arrived in Karamea at the top of the West Coast of the South Island of New Zealand on January 2, 2015, after successfully negotiating the Heaphy Track in a wheelchair.

The Heaphy Track is one of New Zealand’s nine “Great Walks” and the only one on which mountain biking is permitted (from May 1 to September 30). The track is approximately 80 kilometers long and traverses the Kahurangi National Park at the top of the South Island. Most people walk, ride or now roll, the Heaphy Track from Collingwood in Golden Bay through to Karamea on the West Coast.

Arnon was injured in a car accident while doing his national service in the Israeli Army in 2008 and lost the use of his legs. He was an enthusiastic outdoors person before the accident and has managed to overcome his physical challenges and maintain his love of tramping and nature with a little help from his friends. 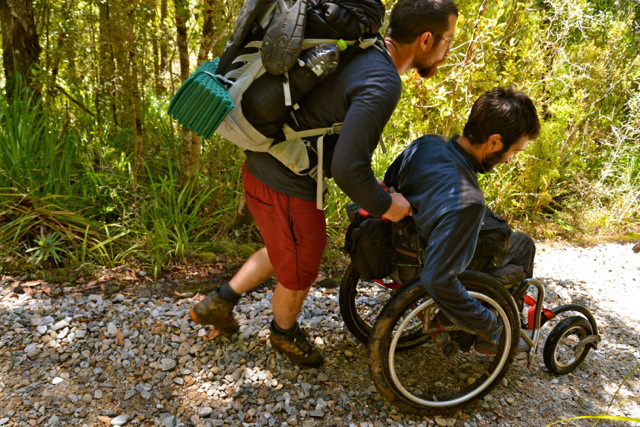 A special off-road wheelchair manufactured in the United States and made of strong, lightweight titanium metal was Arnon’s Heaphy vehicle. The chair handled the track well, but the rigorous terrain took its toll on the machine and minor repairs were required en route to keep the show rolling.

Recent work by the Department of Conservation to improve the track surface and the width and stability of the swing bridges and other river crossings has made the Heaphy Track more easily negotiated by wheeled vehicles like chairs and of course mountain bikes. This may open the possibility of experiencing the wilds of the Kahurangi National Park and the pleasures of traversing the Heaphy Track to a whole range of people, like Arnon, who had previously not been able to tackle the track. 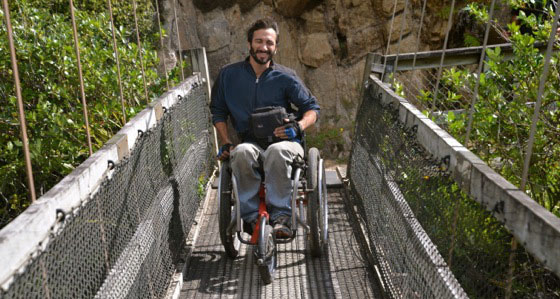 The most challenging section for the man in the chair was the first uphill section of from the Collingwood end of the Heaphy from Brown Hut to Perry Saddle Hut. The track winds steeply uphill through beech forest and tree roots growing through the track make it rough and uneven, not necessarily the best surface for wheelchairs. However, with brother Nadav and friends Maayan and Gul pushing, Arnon made it to the Perry Hut, which is around the highest point of the track at 1,000 metres, in good shape. 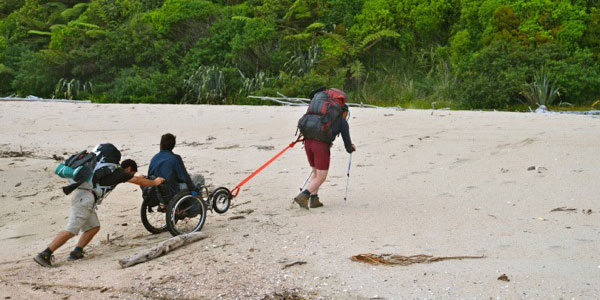 River crossings and sandy beaches also posed challenges that required assistance from the support crew. Nadav piggy-backed his brother across the narrow swing bridges and pulled him along the sand while Maayan pushed from behind.

The weather turned somewhat inclement on the last day of 2014 and many sections of the track became flooded preventing the group from proceeding and creating a bottleneck at the MacKay Hut in the middle of the Heaphy. Fifty people, including Team Israel, were squeezed into a new hut built for 26. Fortunately, the old James MacKay Hut has yet to be demolished and with DOCs permission Nadav broke into the hut and everyone managed to get a bed.

The next day was much improved and Arnon was in his element on the downhill section from MacKay to Lewis Hut. The steep slope afforded him some gravity assisted speed and he apparently even got some air as he bounced the chair over some rocks on the way down. 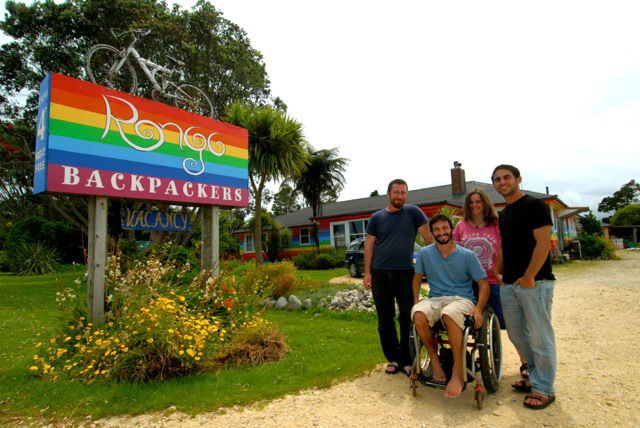 The four travellers are now heading south down the wonderful West Coast and plan on exploring some of the many attractions and tracks along the way and then on to Queenstown and Fiordland, if you see them say hello, they’re a great bunch of fine young folk.

For more information on the Heaphy Track: www.HeaphyTrack.com

Thank you Bonnie, Arnon’s Mother for providing The Spinal Cord Injury Zone with additional info about your amazing Son.

Arnon Amit did a voluntary service year in a non profit which facilitates sports for the disabled in Israel. He then joined the Israeli army for his compulsory service and was in training for a special forces unit. In 2008 he was injured in a car accident when he fell asleep while visiting his family and pals from the unit. He was the designated driver so he didn’t drink alcohol but he was 20 and unaware of how exhausted he was.

Arnon’s spinal cord injury is at the C/6-C/7 level. He is an incomplete quadriplegic and is still athletic and wiry. He spent 3 weeks in ICU in critical condition because of pulmonary and other complications and another 5 months in respiratory and neurological in-patient rehabilitation in Sheba Medical Centre in Israel. That was 6 years ago and Arnon continued to work out in a special muscle therapy clinic called ART run by 2 Danish – Israeli physiotherapists. Arnon has finished his bachelor degree in biology with an emphasis on evolution and ecology and plans to do an M.A. in zoology.

Since the accident in Sept. 2008 he has continued an active social life with his huge circle of friends from before and after the accident. He has water-skied, snow-skied, plays wheelchair-rugby, ridden horses, snorkeled, surfed on his stomach, swam in natural water holes and gone on numerous field trips sleeping rough in the wilderness. He drives and cooks and he is simply a dynamo.

For the last 8 months Arnon has been travelling and trekking and camping through Australia and New Zealand first with 2 army friends and now with his older brother and 2 other friends. After the Heaphy track adventure 2 weeks ago, they have parachuted from an airplane and are now trekking through Fiordland and are out of radio contact for the next week. He reassured his mother that they have an emergency beacon.

After seeing 3 Australian doctors who wouldn’t sign off on a dive medical, Arnon found a 4th in Sydney who he heard was more open to disabled diving and signed his permit. His Mother and her husband plan to join the boys in mid Feb (next month) for a 3 day scuba diving trip on a boat to the Great Barrier Reef and the Yongala shipwreck there.

After a visit to Tasmania, Arnon finally plans to return home to Israel to his family friends and beloved dog after his 10 month odyssey down under. He has only good things to say about the friendliness and helpfulness of the Aussies and Kiwis and the accessibility of both countries!

Arnon is a role-model for his family and for all who meet him with his boundless energy and humor.

Everett thanks high school for support at football banquet