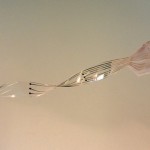 Swiss scientists demonstrated a flexible ribbon-like implant that attaches itself to a paralyzed rat’s spinal cord, allowing the animal to walk again. The prosthetic, described by foremost experts in the field as ‘remarkable’, works by delivering timed electrical impulses and drugs along the spinal cord. In this particular case, rats aren’t that different from humans, and true enough clinical trials are now one step closer. In the future, paralysis might just be another word for “walking funny.”

A breakthrough in medicine

The technology was first introduced by researchers at the Ecole polytechnique federale de Lausanne, Switzerland last year, when it was shown how a rat with a severed spinal cord could walk again after a system of electrical impulses and chemical reactions was introduced. The brain moves the body by sending electrical signals down the spinal cord and into the nervous system. When the spinal cord is severed, the signals can no longer reach that part of the spine, paralyzing that part of the body. The idea is to direct electrical impulses below the cut, where signal from the brain discontinued. This is done via electrodes that take the place of the brain signal, along with neurotransmitting drugs to reanimate the nerve cells beneath the injured tissue. If you find this amazing, you’re not alone. Paralysis might become a thing of the past in just a few decades.

In practical terms, however, a surface implant on a human’s spinal cord is extremely tricky. Because it’s rigid, the constant friction causes local inflammation, damaging the surrounding area. The latest updates features a flexible implant specifically designed to integrate with the patient’s spine, minimizing the risk of rejection and further damage. Called E-Dura, the implant mimics the soft tissue around the spine – known as the dura mater – reducing the risk of inflammation, friction and abrasion.

After implanting e-Dura in rats, researchers found there was no sign of damage or rejection following two months of observation. It goes without saying the the rats could walk once the implant was set. 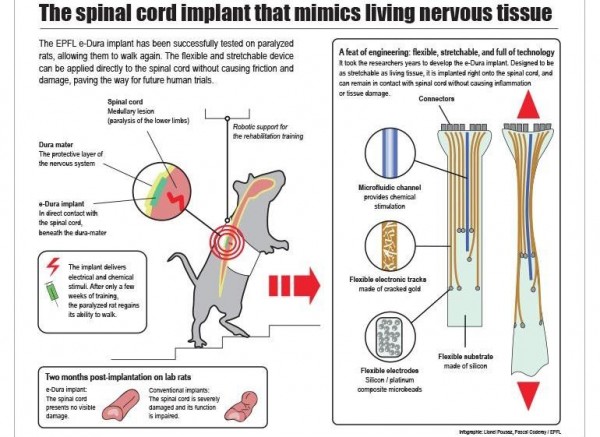 The implant is made of silicon and covered with gold electric conducting tracks that can be pulled and stretched along with the silicon material. The electrodes, a new composite made of silicon and platinum microbeads, can be pulled in any direction. The two components act together and direct electrical signals to the spinal cord in the same manner as the brain would. Meanwhile, tiny microfluid channel embedded in the implant deliver neurotransmitter drugs.

It’s heartwarming to hear that this isn’t the only effort that seeks to abolish paralysis. There are many projects worldwide hard at work developing the next generation of implants and drugs that will make paralysis a thing of history. For instance, another group at Cambridge University has restored movement in the hind legs of 23 dogs after they transplanted nerve cells from the animals’ noses.

The human trials may start as early as June of this year, at a special facility called the called the Gait Platform, housed in the University Hospital of Lausanne, Switzerland. The e-Dura implant was described in a paper published in Science.

Yoga won’t help me walk again. But it has allowed me...