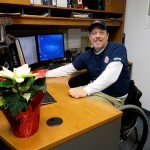 So, in December, when they named him the 2014 Administrative Staff Member of the Year, he was a little surprised.

Faulds, who has been serving as the department’s pre-incident planning technician for nearly two years, has lived in Monroe nearly all his life. The 53-year-old volunteers at the fire department three days a week, working to craft a series of digital building schematics for all of the high-occupancy structures in Monroe. The schematics will be electronically accessible via a county-wide system called New World, in an effort to enhance public safety communications used by first responders during an emergency.

Firefighters will be able to view the plans on portable computers while en route to an incident.

Monroe Fire Chief Jamie Silva explained that New World is scheduled to go live in June 2015. The system will give first responders immediate access to information such as a building’s access points, fire protection features, electrical panel locations and the location of any hazardous storage.

“It gives us the information at our fingertips,” Silva said. “[Faulds] volunteers his time, and he’s been doing a fantastic job.”

Faulds uses a CAD Zone architectural software application called Fire Zone to develop the highly detailed building diagrams. He attended a class to learn the software, and was able to use previous CAD experience to comprehensively master the program.

So far, Faulds has completed renderings of Monroe High School, the Monroe Correctional Complex, Valley General Hospital and several other high-occupancy structures. He is currently in the process of diagraming the Brookdale Senior Living Community. The work is fairly labor-intensive and time-consuming, but it’s work that Faulds finds fulfilling.

“My job at Monroe Fire is most enjoyable for me,” Faulds said. “It’s always good to volunteer and give back.”

Prior to volunteering at the fire department, Faulds and his wife, Reneé, owned and operated Monroe Floral (113 McDougal St.).

Ed and Reneé bought the flower shop right after their daughter Jordan was born, and for the first 10 years, Faulds worked for Kimberly-Clark, Everett’s waterfront pulp mill, while his wife managed the shop operations. Eventually, she decided to return to her career as a paralegal, so Faulds managed the store while continuing his career at Kimberly-Clark.

And then in January 2005, everything changed in an instant.

While on his way to work at 4:30 a.m., Faulds hit a patch of black ice on U.S. 2, which caused his vehicle to cross the centerline and collide with a semi-truck. Faulds sustained a T3 spinal cord injury in the accident, which resulted in paraplegia from the chest down.

“It’s one of those life-changing events,” he said. “But nothing slows you down I guess, it just motivates you to do even more.”

Faulds spent three months in Harborview Medical Center in Seattle after the accident. After an adjustment period, he knew he wanted only one thing; to get out of that hospital bed and resume his life. Faulds explained that psychological evaluations on newly injured spinal cord patients are standard and typically used to gauge the patient’s level of depression. He made a swift and favorable impression on the psychologist who performed his evaluation.

“When he left, he just said, ‘There’s no problem. He needs a chair,’” Faulds said.

Even while still in the hospital, Faulds did not let the accident slow him down one bit.

“They were always paging me,” Faulds recalled. “‘Will Ed the florist please return to the fourth-floor rehab?’ Because I’d be down on the street or out wandering through the building trying to figure out how to get used to using that chair.”

Faulds resumed management at Monroe Floral when he got out of the hospital, but he was unable to return to his job at Kimberly-Clark. He retired on disability, and worked full-time at the flower shop for another eight years before selling it to Monroe resident Jennifer Wirt in 2012. Since then, he’s focused on his family and increased his service to the community through extensive volunteerism.

“For me, it’s always been about doing for others,” Faulds said. “I’ve just always served the community as a business owner and through my work in the Lions Club.”

Faulds joined the Monroe Lions Club in 2013. He loves the significant charitable accomplishments that he is able to achieve through the organization. Last year, the group were able to obtain cataract surgery for a gentleman who was going blind, enabling him to retain his sight, along with his independence.

And he had a great time at the Lions Club’s annual fishing derby event, which takes place every spring at Lake Tye. Each year, the lake is stocked with trout by a company called Trout Unlimited, and kids are invited to come and participate in the fishing derby for free.

In addition to his work at with the Lions Club and the Monroe Fire Department, Faulds serves as a volunteer at the University of Washington Spinal Cord Injury Rehabilitation Center in Seattle, where he mentors newly injured spinal-cord patients. Faulds strives to be a positive example for those facing the challenge of a new spinal-cord injury, so that they can have hope for the future. He tries to help them develop the understanding that they can still lead productive lives.

“Our main goal is to just let them know that you can function, and you can go on,” he said.

For spinal injury patients, it’s a major adjustment, but it’s one that Faulds has managed while maintaining a positive attitude. He hopes that he can help other patients achieve the same.

“You go from being 6-feet tall to being 3-and-a-half feet tall,” Faulds said. “So yeah, you just get used to being shorter. That’s it.”

For Faulds, it’s been all about making the best out of life. His family has long been an integral part of the Monroe community; his Godfather, Claude Faulds, was one of the original settlers in Monroe. References to Claude Faulds can be found in editions of the Monroe Monitor from the 1920s.

Ed moved to Monroe with his family when he was 5 years old, and lived on Woods Creek Road, where his family owned a blueberry farm. His father, William Faulds, who passed away in 2010, served with the Monroe Lion’s Club before him.

In February, Ed and Reneé will celebrate their 27th wedding anniversary. His daughter Jordan, who graduated from Monroe High School in 2010, recently graduated with a bachelor’s degree from Northwest University in Kirkland. Jordan is planning on furthering her studies in Christian ministry, and will be going back to obtain her master’s degree.

Faulds said that it could take a number of years before all the high-occupancy structure designs are completed in their digital format for the fire department.

Faulds was nominated for the Administrative Employee of the Year award by multiple co-workers at the fire department.

“I was pretty surprised,” he said. “It’s really rewarding to do this kind of thing.”

Assistant Fire Chief Steve Guptill said that Faulds’ contributions to the pre-incident planning program will save time and will potentially increase firefighter safety.

“Ed was selected as the Administrative Employee of the Year for 2014 based on his tremendous work on this project,” Guptill said. “In a relatively short period of time, Ed has established himself as a valued and well-respected member of the Monroe Fire Department family.”