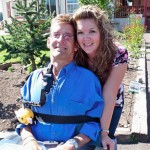 He was 17, 6-foot-2, and could bench-press 300 pounds. He was going to be a fullback for Oregon State University. He had plans for spring break that didn’t include dragging his little brother along on a surfing trip.

But here he was, stuck with a 13-year-old, so mad he shrugged off his mother’s request for a hug goodbye.

March 17, 1980. A perfect, pristine morning, the day before his 18th birthday. Heagy left his brother snoozing on the sand and headed out for what looked like the perfect wave.

The wave broke right as he dove in, pile-driving his head into a sandbar. Heagy felt his neck snap. Then — nothing.

Heagy’s brother saved his life that day, but it was a long time before the mid-valley teen was ready to live. He clearly remembers the day it really sunk in that no amount of therapy would ever bring back any feeling below his neck.

Some 50 students at the alternative Albany Options School listened in complete silence as Heagy, 52, a full-time motivational speaker, recounted his decision to die. He had no future, he figured. No reason to go on.

For the second time, someone stepped in to save his life: a little boy with whom Heagy shared a hospital room, a boy who said he loved him.

“Maybe I’m still here,” Heagy remembers thinking. “I can still do something with my life.”

Nothing else changed, Heagy told the students. He still couldn’t move. But he had a new perspective, and he was determined to do with it what he could.

Heagy went on to teach himself to type, using a pencil in his mouth to poke at a keyboard. He swapped the pencil for a paintbrush and taught himself to work with oils. He earned a master’s degree in social work. He wrote his memoir. He opened an art gallery.

Although he’s no longer associated with the organization, he also founded Camp Attitude on property east of Sweet Home, a place where children with disabilities can experience summer camp.

These days, he’s working on a new endeavor: founding a gathering place similar to Camp Attitude, but in Maui, where children in wheelchairs can experience the beach, the sea and the palm trees. It’s tentatively titled, “Camp Never Give Up.”

“People look at me like, ‘Poor guy,’” Heagy told his audience. “How do you feel now? Your minds changing based on my words? ’Cause if it’s based on what you saw, I would be limited. You would doubt my happiness. Based on what? What you saw.”

It’s not that he doesn’t have any problems, Heagy said, or that his are more — or even less — crippling than someone else’s. Once again, he said, it’s all perspective.

“Your life has purpose. You ever see a puzzle with one piece missing? That’s you,” he said. “Only you can fit in that spot.”

Heagy is the father of two daughters, 10 and 15. The teen lying in the hospital bed years ago never thought that future was possible, he said.

“You choose today. What’s your perspective?” he asked. “I’m here to inspire you to be all that you can be and never give up.”

Students stopped by Heagy’s display table to admire his artwork and thank him for coming.

Warren Scott Brown, 17, said what will stick with him in particular is what Heagy said about how people judge the physically disabled based solely on what they see. “You’ve got to treat them with some respect and dignity,” he said.

Science teacher Jenny Allen said she found the whole presentation uplifting. “It reminds us we all have something to do,” she said.

Jennifer Moody of The Albany Democrat-Herald