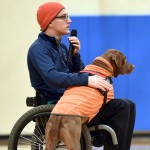 Joe Stone has used a wheelchair for four and a half years.

In that time the 29-year-old Missoula resident has become the first known quadriplegic to attempt the Ironman Triatholon, biked Going-to-the-Sun Road in Glacier National Park and established the Joe Stone Foundation to help others with disabilities get active in the outdoors.

Stone shared his story with students at Cayuse Prairie School on Friday. He opened with a video of himself doing in-line skating stunts before an accident left him paralyzed. Then he showed all the falls.

“Falling down is not necessarily a bad thing,” Stone said. “It pushes us to get back up and try harder.

An adventure sports and outdoor enthusiast, Stone said it wasn’t long before he looked to the sky for action. Skydiving and speed flying became a passion. Speed flying is a combination of parasailing and parachuting.

On Aug. 13, 2010, the course of his life was changed in a speed-flying accident on Mount Jumbo in Missoula. Just as he was picking up speed, complications caused his parachute to collapse. He gained more momentum as he spiraled toward the mountain at about 50 miles per hour.

Stone was unconscious when a passerby, who had worked for an ambulance service, came to his rescue. Within 35 minutes he was on the way to St. Patrick’s Hospital in Missoula.

Stone’s injuries included a “burst fracture” in which the vertebrae shattered into pieces on impact, pressing on the spinal cord and causing irreversible damage.

“Quadriplegic — what that means is you have impairment in all four limbs. So for me, my legs don’t move. My arms look like they move just fine. They do. I have full function, but one thing maybe you didn’t notice, my left hand is messed up,” Stone said turning his hand palm up and trying to close his fingers. “My grip is affected. I can’t make a fist.”

Stone was put in an induced coma, and the hospital became home for the next four months and two days.

Out of all the accomplishments Stone has achieved, the turning point was taking his first breath off the ventilator.

“The first thing I had to do is learn is to breathe again. The first time they took the ventilator off lasted 10 seconds,” Stone said. He had to focus on every breath.

“That was really a tough time for me in the beginning because that meant to me I wouldn’t be able to get up and down the mountains; I won’t be on the rivers; I can’t fish anymore; I can’t fly anymore; I can’t bike anymore; I can’t do anything anymore,” Stone said, adding that at the time he thought he would end up in a nursing home, dependent on others.

Sitting up straight in his hospital bed for the first time, eating solid food, getting in and out of a wheelchair, showering, cooking, all became challenges. Putting on his pants took an hour as he wrestled with his body and relearned daily tasks.

“I had to learn how to use my body,” Stone said. “It was a progression, tough in the beginning but eventually it all became normal.”

When he was discharged from the hospital he returned to Minnesota, his native state, where he had a strong support network of family. Two years later, the call of the outdoors brought him back to Missoula.

“On the other side of relearning how to live in the situation I wanted to learn how to get back to life and for me that was getting back in the outdoors. The goal was to come back to Montana to go to Glacier National Park and bike Going-to-the-Sun Road with just my arms [on a hand cycle] before the anniversary of my accident.”

He had three months to train. Slight slopes on the roads outside his home were exhausting, but Stone stuck to it. He became stronger and accomplished a 13-mile ride in about five hours.

When he got up to Glacier, he was flooded with emotions.

The excitement was back. In the morning he began the slow, grueling journey to Logan Pass. He never turned back.

“At first I looked at this bike on three wheels and saw it as a sign of weakness,” Stone said.

He now sees it as a symbol of strength.

Along the exhausting journey to catch his breath he made small goals — reach a certain boulder, pedal past a tree — and soon he was in the Logan Pass parking lot. He had a different life and a different body, but said he felt like his old self.

“I yelled out loud, ‘I am back, I am back!’ It made me realize my life is still 100 percent limitless. I can go do whatever I want to do,” Stone said.

Three years after his accident he trained more than eight months to compete at an Ironman Triathlon in Florida. His journey is captured in two documentaries, “An Ironman’s Journey,” and the soon-to-be-completed “It’s raining, So What — The Story of Joe Stone.”

“A big part of the film is how the Ironman turns out [for me]. It will blow your mind,” he said. “I want people to push beyond the boundaries of their perceived limitations.”

Mordja was very impressed with Stone’s story; after the presentation she asked him for his autograph.

“I thought it was amazing and inspiring,” Mordja said. “We have students with disabilities in our school and it’s just interesting what he does for a lot of people. He gets their hopes up.”

As far as “flying” again, Stone hasn’t lost his vim. He hopes to fly in the future, starting with a simulated skydiving experience and eventually take to the sky in a wing suit.