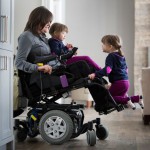 Three years ago, she gave birth to twin girls at Hamilton’s McMaster University Medical Centre, an event so rare that her care team did not know of another similar case.

There are strangers in her house and the three-year-old needs the protection of her mother’s lap.

She scrambles up her mother’s legs, grabbing the wheelchair for support, and settles into the crook of her mom’s shoulder.

Sandra Burton smiles and tucks her chin on top of Emma’s head.

“The girls have been doing this since they started walking,” she says. “They don’t know anything different.”

Three years ago, she gave birth to twin girls at Hamilton’s McMaster University Medical Centre, an event so rare that her care team did not know of another similar case.

Anecdotal research suggests there are no more than four or five other women in Canada, the United States and the United Kingdom who are quadriplegic mothers of twins.

Burton’s husband, Frank Whelan, says their family — the twins were conceived naturally — is a miracle, like winning the million-dollar jackpot five times in a row.

“What happened to us,” he says, smiling at Burton, who is still cuddling Emma, “is really, really special.”

When Torstar News Service last spoke with Burton and Whelan, Emma and her twin, Megan, were just eight days old.

Burton was still in hospital, recovering from what had been life-threatening surgery to deliver the twins.

Like all new parents, Burton and Whelan were overwhelmed with joy and exhaustion and eager to take their twins home. When she was strong enough, Burton held a daughter in each arm, supported underneath by a sturdy stack of pillows.

Sometimes, one will kneel on Burton’s thighs, while the other clings to her lower legs. When they want off, they slither down Burton’s legs as if they are a slide. Both girls know to sit still on their mom’s lap while she cruises around the house in her motorized chair.

Before giving birth, Burton knew that she would need a lot of help with the day-to-day care of her daughters, just as she needs assistance in her own daily routine.

A swimming pool accident, which occurred in the summer of 1991 when Burton was 17 years old, cost her the use of her legs. It was such a severe spinal cord injury — she fractured the C4 and C5 vertebrae in her neck — Burton has minimal sensation from the chest down and limited movement of her arms.

Burton, now 41, is honest about the struggles she faced during the first six months home with the twins.

She was able to hold her daughters with the aid of a custom-made tray that clipped to her motorized chair. She regularly pumped breast milk for the twins and fed them as much as she could. And, when warm weather came, she would sometimes take short tours of their Guelph neighbourhood with either Emma or Megan carefully secured to her chest in a baby sling. She treasured the time alone with each girl.

But there were things that she could not do, no matter how much she wanted to help.

She could not bathe the twins, dress them or change their diapers. And Burton longed to go to them when they cried out in the night. It hurt that she had to wait in bed while Whelan or the live-in nanny brought either Emma or Megan to her side, where Burton could help to bottle-feed or comfort them.

“Your instinct as a mother is to go and pick them up. It made me wish that I could do more.”

Burton overcame her anxieties by drawing on the same strength she used while learning to live with a devastating spinal cord injury.

“I learned how to adapt,” she says. “I also learned I had to accept that there were certain things I couldn’t ever do.

“I’m paralyzed. I can’t change that. But I can change my attitude about how I feel about my paralysis.”

Burton had a deeper concern that didn’t go away until Emma and Megan were older. With so many other people caring for the girls, she wondered, would they recognize her as their true mother?

During the twins’ first year, the house was filled with people to help the new family, including Burton’s personal support workers, a live-in nanny, a second nanny to help during the day, her mother, plus friends and neighbours. Whelan, 42, owns a home inspection agency and works full time.

“I was worried the girls wouldn’t bond with me because we had so much help,” Burton says.

As she finishes the sentence, Emma and Megan rush over to show their mom a toy, one girl on each side of her chair, both chattering loudly, eager for Burton’s attention.

Whelan grins and says: “How could they resist such a mother.”

Both parents are proud of how the twins try to help Burton by pointing out accessibility ramps in shopping malls and running to press the accessibility button that will open a door for their mom.

Burton would like others to be as open-minded as her children when it comes to parenting with disabilities. When she is out with the twins and a female friend, people who stop to admire Emma and Megan often assume Burton is not their mother.

“It doesn’t bother me; I just happily say they are mine and smile. However, it does show that there is still a lack of awareness that people with disabilities can be parents too.”

In November, the family moved to a new home in Puslinch, a rural township at the south end of Guelph. The house is custom-built for Burton, with wide halls and doorways for her motorized chair and a lift to the basement recreation space.

Unlike their old home in Guelph, all the bedrooms are on the main floor, a relief for Burton who could not easily access Emma’s old basement bedroom.

Now, the family has a new morning tradition. As soon as the girls wake up, they rush across the hall into their parent’s bedroom and jump into bed with their mom.

Burton loves hearing the pitter patter of their bare feet on the hardwood floor and the time spent cuddled in bed before her support worker and the twins’ nanny arrive at 7 a.m.

Burton will not have any more children; doctors deem it too risky.

For this reason, and so many others, she is grateful to have had twins. She is close to her brothers and sisters and says she cherishes the special bond between siblings.

When the girls go to junior kindergarten, Burton plans to return to her job as a speech language pathologist. She may also take courses at the University of Guelph to become a therapist.

For now, she enjoys being home with the girls.

There are snowmen to build, dance classes to watch, stories to read, songs to sing, cuddles to cherish.

“Being a mom was always one of my dreams,” Burton says. “Now, it’s here. And I love every moment.”

Man In Motion to carry Olympic Torch in Richmond