You Can Help Find a Cure for Spinal Cord Injury 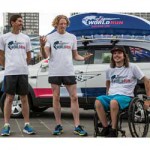 Wings for Life and the Reeve Foundation have united around a common goal and need your help today.

It all started with a single toe. Even today, Dr. Susan Harkema recalls the words spoken by one of the research participants: “Look Susie, I can move my toe.” The patient’s name was Rob Summers and he was completely paralyzed from the neck down. After a car accident he was told he would never be able to walk again. But just a few weeks after Harkema had implanted an electrical stimulator wired to the spinal cord, the unthinkable suddenly became reality. Rob slowly started to move his limbs.

He was the first of four patients who received epidural electrical stimulation during experimental therapy. In a world where spinal cord injury is still deemed irreversible, the stimulation of nerves that were thought to be lost was considered nothing short of a medical miracle.

Learn more about this breakthrough therapy in the video below:

Today, in a powerful statement for the progression of spinal cord injury research, the Wings for Life Spinal Cord Research Foundation and the Christopher & Dana Reeve Foundation announced they have joined forces to expand Dr. Harkema’s groundbreaking work. The partnership will enable researchers to move forward with a breakthrough clinical study that will likely commence in mid-2015.

The study, called The Big Idea, will test the hypothesis in 36 individuals living with spinal cord injury that epidural stimulation can be used to recover a significant level of autonomic control. A special group of eight patients will be funded with a significant part of the proceeds from the inaugural Wings for Life World Run, held in 2014. The global running event, which saw thousands of athletes start at the very same time in 34 locations around the globe, generated $4.1 million to foster promising spinal cord research projects. The event will be held again on May 3, 2015.

“It is rare for two nonprofits to join forces but when you have the ability to change lives in the here-and-now, it is critical to leverage resources and lock arms for the sake of the millions living with paralysis worldwide. We believe that together, we can help mobilize people to support this research and get us there quicker.”

“Dr. Harkema’s study is a unique example based on solid science,” added Wings for Life scientific director Jan Schwab, “culminating over the last 30 years into a frontrunner study, aiming to make a difference for patients with spinal cord injury.“

However, much work is still left to be done: “The Wings for Life Foundation and the Christopher & Dana Reeve Foundation joining forces is incredible and it means that we can move this forward at a much faster pace,” said Dr. Susan Harkema, University of Louisville professor. “I’d like to thank all the participants and runners of the Wings for Life World Run and encourage people to join again on May 3, 2015.”

You can help this amazing and inspiring research move forward in leaps and bounds by signing up now for the Wings for Life World Run nearest you via the links below:

For more, visit the Wings for Life World Run site.