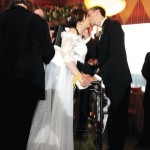 AUSABLE FORKS — Standing among the friends and family gathered at the Jan. 1 wedding of Michaela Bushey and Kyle Devins were a trio of Pennsylvania rehabilitation specialists.

Frank Hyland, vice president of Rehabilitation Services; Sue Golden, director of neurorehabilitation; and Alyssa Hauck, physical therapist, had traveled from their offices at the Good Shepherd Rehabilitation Network in Allentown.

Along with joining the festivities at the Golden Arrow Lakeside Resort in Lake Placid, they were there to make sure everything went smoothly as Michaela used an Ekso Bionics exoskeleton to walk down the aisle.

A 2010 swimming-pool accident had left the 24-year-old AuSable Forks resident paralyzed from the neck down.

Since October 2014, Michaela has been traveling to receive therapy at Good Shepherd, the latest in a list of rehabilitation centers that has included the Shepherd Center in Atlanta and the Kennedy Krieger Institute in Baltimore.

The Good Shepherd staff’s willingness to travel more than 250 miles to assist her on her wedding day was just one of the many ways she has felt valued during her time at the facility, Michaela said.

“They’re like a family, and when you come to do therapy there, they really show that they care about you,” she said.

Along with the personalized care, Michaela said, her experience using the exoskeleton was better than any other walking simulation equipment she had used before.

Unlike machines that used tethers to hold her in place, the exoskeleton is a wearable device that moves the patient into a standing position.

“As I was getting up in it, it was like a light bulb went off in my brain like, ‘Oh yeah, this is how you get up,’” she said.

A therapist stands behind the patient and uses a remote to make the device step forward. Though Michaela’s muscles are not directly causing the movement, the equipment guides the legs through the motions.

Performing those familiar movements and recalling those sensations are at the heart of the rehabilitation philosophy at Good Shepherd.

“There is emerging evidence that the brain and spinal cord are plastic and capable of recovery — a concept called neuroplasticity,” Golden said in a Good Shepherd press release.

Michaela’s mother, Angela, said an important part of that recovery is not giving in to the idea that the loss of movement is permanent.

“With daily work, you may regain lost abilities, and a lot of that has to do with repetition,” she said.

Michaela said she has already experienced the benefits of visualizing recovery when she made her left arm move in the weeks after the accident.

After repeatedly thinking about moving her arm, she felt a muscle twitch in her bicep.

And though recovery in her lower limbs hasn’t been as dramatic, she has sensed muscle contractions in her legs while using the exoskeleton. Her doctors have also detected improved muscle activity in her lower back.

But while walking down the aisle on her wedding day, the health benefits of the equipment were overshadowed by the life experience that the technology gave her.

“To have something like that back was really emotional; it felt really good. It was such a wonderful thing that I never expected,” she said.

Her mother teared up recalling the sight of her daughter that day.

“It was wonderful, breathtaking,” she said.

Her father, Michael, agreed that it was a powerful experience, walking his daughter down the aisle.

“It was almost overwhelming; it was amazing,” he said.