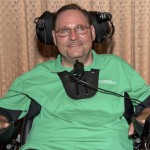 When Joe Groh finally returned home, six months after the accident, his bed left him staring directly into the bedroom mirror.

Completely paralyzed from the shoulders down, it wasn’t like Joe could escape the mirror. And neither was there any escaping the reality of his situation.

“I looked at myself in that mirror and said, ‘What are you going to do?’” he recalled. “And I had no idea.”

Finding something to do had never been a problem for Joe. He was a 53-year-old, go-go kind of guy who had followed his father, grandfather and other family into the construction trades.

Specifically, he was an HVAC man — heating, ventilation and air conditioning — and had worked his way from installation to high-level sales and marketing.

After the family festivities of Father’s Day 2008, Joe was itching for some exercise. So late that afternoon, he jumped on his mountain bike for a quick ride in the park near his home in Grapevine.

He may have been too eager. He entered a curve too fast. Sand on the pavement sent his front wheel skittering off the side. And suddenly Joe was airborne.

“I remember thinking as I went over the handlebars: ‘I wonder how much this is going to hurt.’”

His next awareness was of lying immobile on the ground. Utterly immobile. He looked to the side and saw his hand, but eerily, it was like looking at someone else’s hand. The hand had lost connection to his brain — along with the rest of his body.

Hard to believe, but even while there on the ground, waiting for help, Joe made a promise to himself. “I vowed to never look back, never give up and remain positive.”

He would repeat that to himself many times during his long medical treatment. But once he was back home, facing that mirror and life as it would forever be, the vow required even more conviction on his part.

In his heart, he wished he could stay in the construction industry. “I really enjoyed it, and there are so many fine people,” he said.

And part of him wished he could return the many kindnesses that had been extended to him and his family.

Out of those twin desires, the Joseph Groh Foundation was born. Directed from the high-tech command center that is his bed, Joe and his many industry friends raise money to help other construction families dealing with injury or disability.

His annual golf tournament is coming up May 4 at Coyote Ridge Golf Club in Carrollton. Players and sponsors are still very much welcome. (For more information, visit JosephGrohFoundation.org or call 214-998-9749.)

Joe is 59 now. He and his wife, Sue, live in Fairview in Collin County in a down-sized home built especially for his needs.

Joe amazed me with all that he can do from his bed with his voice-command computer and controllers. He looks a little like a one-man band. He wears two headsets and answers the phone with a sip on a tube.

“I can do everything from here except walk the dog,” he joked.

Last year, he wrote an interesting and inspirational memoir — From Two Wheels to Four — by dictating it to his computer. It’s another of his fundraising efforts and is available at his website.

He’s talking with folks about a poker tournament at an Oklahoma casino. “We’re wide open to ideas,” he said.

And with the money raised, 23 families have been helped in all sorts of ways, from widening doors to accommodate a wheelchair to buying special adaptive equipment.

Thanks to such equipment, Joe can do much on his own. For the rest, Sue is able to work from home and lend a hand.

“We’re very blessed with what we have,” Sue said. And Joe was quick to agree.