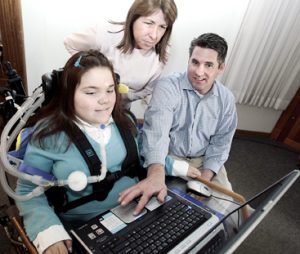 Usually, Santa Claus arrives Dec. 25. This year, “Santa” took a little extra time to bring a special gift to a deserving young Edmond girl. Stephanie Mundell, 13, wished for a computer for Christmas, but she can’t type on a keyboard in the traditional way. When she was 3 years old, she was hit by a car and suffered a C-2 spinal cord injury, which left her without movement of her arms and legs and unable to breathe without a respirator.

Stephanie needed a computer she could operate with a mouthpiece, equipped with special word-recognition software. And with the help of some Edmond friends, “Santa” came through with a Hewlitt-Packard laptop computer, a printer and wireless Internet service.

Kellie had provided therapy for Stephanie from her pre-kindergarten days through grade school, and the Taylors knew the Mundell family from school, too, since their son attended Washington Irving Elementary School when Stephanie was in classes there.

And the two families were acquainted through the Spinal Cord Injury Association of Oklahoma. Taylor himself is wheelchair-bound after a bout with Guillian-Barre Syndrome and a blood clot in his spinal cord in 1996.

Stephanie is now a seventh-grade student at Cheyenne Middle School, and she has already learned to work around her injury in amazing ways.

She writes, draws pictures and reads books with the help of special mouthpieces, and she gets around in a special “sip and puff” wheelchair.

She listens to pop music and watches “American Idol” on television, like any other teenager.

And now she’s learning to surf the Internet, thanks to Taylor’s willingness to provide the equipment.

“We have an attorney friend who wanted to make a donation to Stephanie through the Spinal Cord Injury Association,” Taylor said.

Because of that donation, Taylor — a past president of that organization — was able to pick out a computer and bring it to the Mundells’ house on Christmas Day.

“I think she was kind of shocked,” Taylor said.

Although she had the computer and special WordQ software to help her type, she still didn’t have Internet service. That part took “Santa” a little longer to deliver.

Taylor turned to AT&T to provide Internet, and a fund has been set up at Citizens Bank of Edmond to finance the monthly charges.

“I’m so excited about it,” her mom said. “She’s been needing a computer for a long time. It’ll help her with her homework.”

The first place Stephanie visited on the Web was the “American Idol” site, but now she says she likes to go to the Disney Channel site and use the laptop to play “Mine Sweeper.”

She uses her laptop at school only about an hour each month during Occupational Therapy training, but she plans on taking computer classes as soon as possible, and says the equipment will be even more helpful as she enters her high school years.

For now, Stephanie works on the laptop almost every night, her mom said. It seems like an appropriate pastime for a teenage girl.

“It’s the best Christmas present ever,” her mom said.