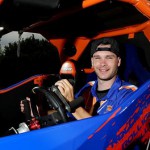 CHAD Graham’s left hand, you notice, is strapped onto the steering wheel of his customised buggy.

Not around the wheel. Onto it.

“My fingers and hand, they can’t really grip anything,’’ he explains. “So I’m strapped on and steer with my wrist.

“Then, because I can’t operate the brake or accelerator pedals either, my right hand is tied into the top of this gearstick.”

It is, Graham shows you, a fairly simple procedure.

And as for how far back he takes said stick?

Call it an outlook that has already won over NRL figures Jamie Soward and Nathan Hindmarsh.

All of them knowing that around Graham’s Blue Mountains home are modified waterskis, buggies, even a single rowing skull. “That one took dad five attempts to get right,’’ Graham grins, pointing to the skull. “But we got there.”

Indeed, since dislocating his neck in a motocross accident eight years ago, Graham has continually pushed his body harder than he ever did as a promising rider.

Driving, rowing, lifting weights, Graham does it all.

He works out in the gym wearing customised gloves. Drives his buggy off road and even goes waterskiing, despite having no movement anywhere beneath his armpits.

Which is why, come August, Graham will climb inside his customised off-road buggy and, for no reason other than the challenge, drive some 4800km from Kalgoorlie in Western Australia to Cobar, NSW.

“Completing,’’ he says, “a dream I had shortly after the accident”.

And still, this isn’t all.

The goal, to garner enough corporate support from his journey to raise $200,000 for young men and women who, overnight, find their worlds completely upturned like his.

“It was the State motocross titles — 2007,’’ he recalls. “I was coming second into the final day when bad weather washed us out.

“So a few friends and myself, we went riding at a nearby property. I came around a corner, went high and … next thing I’m being airlifted to Sydney.”

After spending the best part of a year in hospital, Graham emerged to begin what has since become a life of persistence.

Supported by family, friends and tireless parents Peter and Wendy, he finished school, completed a business course, gained employment in an auto shop and earned his NSW Drivers licence.

And now, Graham wants to help others.

Achieving with his hand strapped onto the wheel — not around it.

# Chad is holding a fundraising night at Penrith Paceway on May 23. For more go to www.chadschallenge.com.au or www.roll101.com.au

Team is a ‘Ray’ of inspiration to others