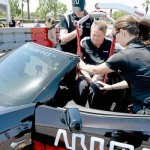 Sam Schmidt was in the cockpit of a black Corvette C7 Stingray as the car zipped across the pavement of a simulated road course while practicing for the Toyota Grand Prix of Long Beach this weekend.

A warm wind was blowing across the Auto Club Speedway in Fontana as Schmidt accelerated out of a curve, speeding past a small gathering of onlookers, then receding into the distance.

The real action, however, was happening inside the car, well out of view to fans enamored with speed and the allure of his highly modified Corvette.

Schmidt, a quadriplegic who is unable to use his hands and feet to control the gas and brake pedals, was testing the latest evolution of a system that enables him to control the Corvette solely by head movements and his own breath.

“Frankly, after being injured 15 years ago, I never had any realistic hope of driving a car again,” said Schmidt, who survived a racing accident in early 2000. “At the base, core level, it’s great to you know, sort of do something everybody takes for granted.”

The Corvette houses a set of infrared cameras arrayed inside the cockpit that have been calibrated to track Schmidt’s head movements, so when he looks at a spot in the road, the car turns in that direction. The car increases speed when Schmidt blows into a specialized straw and slows down when he inhales.

“It’s weird. You turn and it goes,” said Schmidt, who grew up in Sylmar and now lives in Henderson, Nev. “Probably the most challenging thing is the mental focus. You can’t drift around mentally. You’ve got to hope there aren’t a lot of bikinis in the grandstand. That could be tragic.”

Arrow Electronics, a Fortune 500 company based in Centennial, Colo., is leading development of the system, called SAM for semi-autonomous motorcar. Freescale Semiconductor, an Austin company, is also playing a major role in the project.

The SAM Car project’s nontechnical director, Joe Verrengia of Arrow, said engineers have developed the system by integrating common components. Schmidt is scheduled to demonstrate the current version of the system by driving a Sunday morning lap around the Long Beach Grand Prix course.

“This is a real significant milestone for us,” Verrengia said.

The Way to the Starting Line

Schmidt’s name is likely known to people who follow IndyCar racing as a former driver and current racing team co-owner. Born in 1964, he grew up a racing fan who frequently attended the Long Beach Grand Prix and was participating in motocross events when he was as young as 5.

But Schmidt’s youthful aspirations to a driving career were disrupted at the age of 10 when his father, who competed as a drag racer, was injured. Schmidt instead took a more conventional life path, earning an MBA at Pepperdine University and embarking on a business career before being drawn back to racing after a visit to Willow Springs International Raceway in Rosamond, near Edwards Air Force Base.

“It was 1991 and my uncle was racing in Southern California, and I went out to watch and I kind of got hooked again,” he said.

He bought a Renault Sport and entered Sports Car Club of America races in 1992 and drove open-wheel cars in the Formula Continental class the following year. He continued to advance and joined the Indy Racing League in 1997, which afforded him a chance to compete in his first Indianapolis 500.

“I really want to continue to do this and to do it at a more magnified level,” he told the Los Angeles Daily News in 1997. “And I really want to win the Indianapolis 500.”

Schmidt took 34th place in that race. The next year, he finished in 26th place in the Indianapolis 500 and claimed 30th place at the race in 1999.

The following year, on Jan. 6, 2000, Schmidt’s racing career seemingly came to an end at Walt Disney World Speedway in Florida. He crashed into a wall during a practice race and was flown from the track to a hospital, having suffered a major spinal cord injury.

In spite of being diagnosed as quadriplegic, Schmidt started his own racing company, now called Schmidt Peterson Motorsports, a little more than a year after his injury. In 2013 he got the phone call that led to him getting back in the car.

“Sam is a race car driver,” said Arrow Electronics engineer Will Pickard. “He never stopped being one, he just didn’t have a car to drive.”

Schmidt’s first time testing the car on a track came in April 2014. Weeks later, he was back at Indianapolis Speedway, reaching a speed of 107 miles per hour on the oval track. The SAM Car’s systems, however, had been upgraded to prepare for the twists and turns of the Long Beach course.

“This is the first time that we have done a road course,” Verrengia said. “It’s much more challenging and it requires a significant modifications.”

The current version of the steering system employs a set of four infrared cameras mounted near the top of the windshield. The driver wears a baseball cap with nine spherical reflective markers that look like pingpong balls attached to a framework that fits over the cap.

As the driver turns his head toward either shoulder, the cameras track the movement of the reflective surfaces and send that information to the car’s main computer, stored in its trunk, that performs calculations that determine how the driver’s movements control the steering wheel.

The car has new cameras for the Long Beach race that are designed to record actions within a wider field of vision in order to give Schmidt more control of his turns.

The breath control system is another new addition to the car. At Indianapolis, Schmidt controlled his acceleration using a system that added 10 miles per hour to his speed every time he tilted his head backward, but that wouldn’t work for the Long Beach course with its 11 turns.

Hence the addition of what engineers at the speedway referred to as “sip and puff” technology: “sip” to slow down, “puff” to go faster.

Similar technology is already used to help people living with serious injuries or disabilities control wheelchairs like the one employed by Russel Burke, 38, who was at the Fontana track Wednesday to watch Schmidt’s practice. The Simi Valley resident was hurt two years ago after a diving accident at Lake Havasu.

Burke said he could likely could learn to drive with the kind of systems employed by the SAM car, having already learned to use his breath to maneuver his wheelchair.

“You get used to it pretty quick,” he said. “I bet you I could do it pretty easily.”

Verrengia and Pickard essentially described the SAM Car as a demonstration project to show the potential to find new uses for existing technology to improve the way people interact with machines.

“The control systems we develop with tracking head movements, with the ‘sip and puff’ tubes, those can be extrapolated to any type of human-to-machine interface,” Pickard said. “It can be everything from working a computer, running an oil rig, running a tractor. Sam’s already talked about looking at these various applications as assistive technologies for other users with quadriplegia or limited mobility.”

Schmidt and his SAM Car will drive the Long Beach Grand Prix course at 11:19 a.m. Sunday. The car will also be on display during race weekend.