After years of paralysis, a man drinks a beer with the help of a mind-reading robot 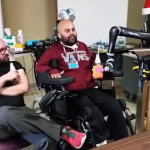 A new thought-controlled robotic arm taps into a different part of the brain than most, which its creators say may give its paralyzed users an easier learning curve and allow for more fluid movements. They report on the success of their first patient, Erik G. Sorto, in a paper published Thursday in Science.

When Sorto, paralyzed from the neck down for a decade by a gunshot wound, signed on to have neuroprosthetics implanted in his brain, he was very clear on what his first goal would be: After years of having to ask someone to hold straws to his lips, he wanted to be able to drink a beer on his own. His medical team now reports that he’s accomplished that and more.

Sorto isn’t the first patient to help test robotic arms that take their cues directly from brain signals. But unlike previous subjects, Sorto doesn’t use his motor cortex — the part of the brain that creates movement — to operate the arm. Instead, his doctors had electrodes implanted in the posterior parietal cortex (PPC), which transmits the intention to move down to the motor cortex to translate it into movement. Here’s more about how it works:

By working from higher up the neuron chain seems to work just as well, and it might actually make things easier for the patient, lead researcher and Caltech professor Richard Andersen told The Post.

“It certainly seems to come very intuitively,” he said. When the robotic arm is connected to the motor cortex, the patient has to think through all the steps of an action they want the arm to complete: To move an object, the user must imagine reaching their arm out, then turning their wrist and moving their fingers to grasp the object, then lifting it and placing it down. The system Sorto is using takes his intentions and interprets the motion needed. He was able to move the arm on the first day he tried to, just weeks after the 2013 surgery that implanted nearly 200 tiny electrodes in his brain.

“He’s been able to do various things. He can play video games and do rock paper scissors, he can grasp objects,” Andersen said. “And of course he had a personal goal, which is to control the speed at which he drinks a beer, so we implemented that first.”

Along with his research team at Caltech and their partnering medical team at Keck Medicine of USC, Andersen has put these PPC implants in three patients, all of whom are doing well so far. One patient has electrodes in their sensory cortex as well. Andersen and his team are trying to use these electrodes to create a sense of touch in the paralyzed patient, allowing them to sense feedback when their robotic arm touches an object so they can better control its movement. And another patient has had such success moving individual fingers of the arm that the team hopes to work on typing and interaction with tablet devices.

But Andersen stresses that this technology is in its early stages.

“It’s hard to compare the different systems being tested, because the studies are done with different patients in different labs,” he said. “So to compare and contrast them, we’ll have to eventually be working with the same patients.” To figure out just what parts of the brain should be used to interface with robotic prosthetics, he said, researchers will need to give the same patient multiple implants and compare them — something that he hopes to do in the future. It may be that the best possible system uses electrodes in different areas of the brain working in tandem.

“We plan to test that, so we can see what signals are redundant and which are complementary,” he said.

Sorto is upbeat about his progress, and says the most difficult aspect of the study is his need to travel to the lab several days a week. For now, he can only use the equipment at Rancho Los Amigos National Rehabilitation Center with the help of a graduate student and an occupational therapist.

“I commute over there, and it takes me awhile — about two hours. And I need to stay really healthy to participate. So that’s hard,” Sorto said. “But my hope is that in the future, people with my disability will use this to gain some independence.”

The team will continue to work on Sorto’s ability to control the arm in the hopes that one day — when he and other patients are able to take such technology home with them — it will truly change his day-to-day life.