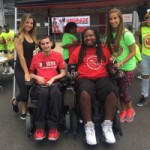 The injury has left the Monroe Township native relegated to a wheelchair while undergoing intense therapy and rehab five days a week.

“He’s got movement in both his arms and his legs, and he’s adapting to his new life,” said his father, Steve Nichols.

The family had no idea what to expect in the aftermath of the tragedy.

“What we’ve come to learn is that the world is full of very, very generous people,” Steve said.

The community has rallied around the Nichols family for support and various fundraising endeavors to help bridge the exorbitant expenses for Mikey’s medical care and cost-of-living.

Steve said that while Mikey maintains a normal teenage social life with his girlfriend and friends, a big challenge remains being reminded of his condition because of the wheelchair.

Another constant struggle is living life without his greatest passion.

Still, Mikey is making constant strides in his recovery. The next physical benchmark will be transferring himself to and from his chair.

The 19-year-old is also set to take driving lessons in the next month to learn how to operate a specially equipped car. He is also hoping to begin taking college classes by the winter semester.

Steve said his son’s friendship with former Rutgers player, Eric LeGrand, has had a huge impact on Mikey’s day-to-day efforts. The two have supported each other while they both recover from spinal injuries at Kessler Institute in West Orange.

“When you have an injury like this, you kind of think you’re alone in the world,” Steve explained. “And it’s just wonderful that a guy like Eric takes time out of his busy day and shows Mike that life goes on.”

The two have joined up with Team Reeve to help raise money and awareness for research and quality-of-life initiatives for paralysis and spinal cord injuries.

The 2nd annual Golf Outing to benefit Mike Nichols and the Christopher & Dana Reeve Foundation is being held on Tuesday, August 4, at Royce Brook Golf Club in Hillsborough, NJ.

Proceeds will benefit the Nichols Family Trust and The Reeve Foundation.

In addition to that great event, the Jamesburg Elks 2180 have once again stepped up to assist the Nichols family.

They host Miles for Mikey on Saturday, August 15. The event features an escorted motorcycle ride in the morning, followed by a street fair gala at the Jamesburg Elks Lodge with streets closed off around the area.

Last year’s fundraiser drew more than 500 people and raised over $14,000 to help the Nichols family offset their mountains of bills.

“Keep the community aware, keep it out there, and help the Nichols’ as much as we can,” said Lori Zimmerman, Miles for Mikey chairperson.

Steve Nichols said that while they are many struggles and adjustments, his family has been very fortunate for the community support. He estimates the process to retrofit their home and make it accessible and equipped for Mikey is about 90 percent done.

He marvels about the mental toughness and character his son has shown during this tremendously difficult situation.

Find out more about Mikey Nichols, his recovery, and upcoming fundraising events by visiting the Mikey Strong 23 website and Pray for Mikey 23 Facebook page.