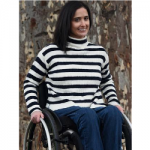 GEORGINA Fiorentino thought her life was over when she lost feeling in her legs and became reliant on a wheelchair.

“You go through a whole process in your mind that it’s all too hard,” the Essendon North resident said.

“A lot of people have no idea the bits and pieces that follow on from a spinal injury.

“There are so many other things that are affected that are worse than not being able to walk.”

Ms Fiorentino had lupus, an immune system illness that caused a major blood clot in her spinal cord in November, 2003.

It was only with the support of the Australian Quadriplegic Association Victoria that Ms Fiorentino came to the understanding there was still so much of her life to live despite being a paraplegic.

“They were able to demonstrate that you can live life to the fullest despite living life in a wheelchair, and it pretty much opened a world to me, in terms of realising that you can be happy,” Ms Fiorentino said.

Among the things Ms Fiorentino was able to do was return to work as an accountant, travel overseas and play wheelchair tennis and handball.

“I decided there was a point in time that you decide you move on and live your life the best you can, whether it be getting back to work or to go out and socialise and play sport,” Ms Fiorentino said.

On July 26 she will cover 5km as part of Run Melbourne to raise money for the association’s new service, Spinal Injury Resource and Support Network.

Ms Fiorentino has been volunteering with the association for about five years and shares her story and advice with people at the Royal Talbot Rehabilitation Centre, Austin Hospital and during organised events.

“It is rewarding for me because I’m helping people,” she said.

“You can tell by the look in their eyes straight away that getting encouragement from me, you can see a change.”

Ms Fiorentino participated in Run Melbourne’s 10km course last year, but will take on the lesser distance to ride beside members participating for the first time.

Her husband, Andrew, will also join her.

To help the association raise its target of $20,000, click HERE.