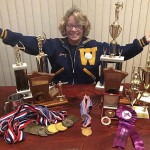 In 1983, at age 17, Jennifer Peterson was injured while downhill skiing. The injury left her a quadriplegic, with no use of her legs and limited use of her arms. While her body was different, her drive and determination to succeed was not. She got her Ph.D in Organizational Psychology from Walden University and became an executive coach. And stayed involved in sports.

As she wrote on her website, tailfeathercoach.com, “I have experienced first hand that life can throw curve balls and as a result, I’ve learned to adjust my swing.”

She became a world champion in disabled archery, setting state, national and international records. She went hiking, biking, whitewater rafting, zip lining and kayaking. She entered the Ms. Wheelchair Minnesota pageant and won. Over the past year, she became involved with horses again.

Before her injury, Peterson showed hunter-jumper horses and loved it. It was something she greatly missed after her injury. As a wheelchair-bound quadriplegic, she knew she could not ride again.

She met some people who drove horses and realized that was something she could do.

She reached out to my family because she had been told we had miniature horses and Shetland ponies that could drive. She believed a smaller horse would be easier to handle. We put her in touch with someone who designed and built her a driving cart that could accommodate her wheelchair. We lent her a calm and safe miniature horse to learn to drive.

A few months later, she found a mini of her own, a mare named Holly.

Peterson, with help from her husband, Pete, drove Holly a few times a week for several months. In late June, Peterson participated in her first horse show in more than 30 years, showing Holly in four driving classes at the Minnesota Miniature Horse Club show in Cannon Falls.

BS: What was it like, showing for the first time in more than three decades?

JP: It was being excited and fearful at the same time. Going into the ring, I thought, “Oh my gosh, I’m going into the ring with 11 other drivers and I haven’t been in the ring with other drivers.” I’ve been in the ring riding horses with other people, but never driving. That physical memory of riding is long gone. The driving for me is so exciting because it’s a reconnection with horses. It’s learning the new language. What’s coming back to me is horse behavior. I’m a novice in driving, but the knowledge in horses is coming back.

BS: Was there a period of time when you thought you would never show horses again?

JP: Absolutely. My desire was to just drive a horse and get around horses again and get horses back into my life. And then I was told, “You can show.” I thought, “What?” My competitive side said, “That would be fun.” I didn’t go into it with the intention that I would show.

JP: They’re too big and every horse spooks, and they could seriously hurt me. I don’t have that fear of, “Oh my god, what is going to happen here with smaller horses?” It has been so much fun. I love the minis. It’s comforting. They’re the perfect-size horse.

BS: What was the first sport you got involved with after the injury?

JP: I tried to do swimming, but it was archery. I started doing archery, and it snowballed. I could do it anywhere. Often, I was the only female quadriplegic who was competing. So, often I would compete against the men and beat them.

BS: Did you compete in archery before the injury?

JP: I did track and field in high school and lettered in diving. I always was active in sports. I rode horses, loved water skiing, downhill skiing, biking. After my accident I was living at Courage Center, and that’s when I got involved in archery. I was 17 years old. I competed and traveled at the international level for about 15 years. I went to the world championships in Austria, Sweden and England. I won several world championships.

BS: Do you still do archery?

JP: No. It kind of ran its course. I got interested in other things. In 2011, we did an adventure race in Colorado. It was hiking, biking, whitewater rafting, zip lining and kayaking.

BS: You did all those things?

JP: We were on a five-person team. Two people were disabled and three were able-bodied. I never kayaked before. Out of that, I got an adapted kayak. The kayaking is pretty incredible. Once you got me on the lake, it probably was the first time that moving my body was easy. And now I have a tandem bike that me and Pete ride. There still are days that suck. I want to go water skiing. I want to go running. That’s not going to happen. What else can I do?

JP: I’m a person who believes it’s about safety first. I don’t go out when it’s treacherously windy. I go out there when the lake is like glass. I wear a life jacket, and I don’t go out by myself. And life is dangerous. That’s the whole thing about safety first. I wound up in a wheelchair because of an accident. You don’t plan for accidents. You’ve got to live your life. Find what works.

BS: How did you get hurt skiing?

JP: It was a church ski trip in Wisconsin. It was near lunch time. We said, “Let’s do one more run.” It was the infamous one more run. I caught my ski tips and landed on my neck. It takes 4-1/2 pounds of pressure to break your neck. It was an accident. Stuff happens. At that moment, it was very traumatic.

BS: After your injury, how long did it take to come up with your philosophy “that life can throw curve balls and as a result, I’ve learned to adjust my swing.”

JP: I think for probably three years after my accident it was a process of putting the pieces back together and figuring out how do I drive a vehicle? That’s where Courage Center was so helpful because they have a driving program. You have to reinvent the wheel to learn everything. I figured out there was a lot of things to do physically. I have a highly developed brain and can be a highly professional person, too. It’s the process of figuring out stuff. One of the main themes is finding people who, when I find something, they champion it and say, “Let’s figure out a way.” You can’t do it alone. At least I can’t. It’s finding people who share the dream and get as much out of it as I do. My advice to people is don’t be small. Figure out what you want to do and find the people who can help you do it.

BS: In your role as an executive coach, do you use the things you’ve done as examples that no challenge is too difficult to overcome?

JP: Sure, my philosophy with coaching is: I’m not going to ask anyone to do something I haven’t done. A lot of my work is asking, “What do you want to do in life? What’s your dream? What’s your passion? Go do them. Don’t live small. Live big.”

BS: You have competed in archery and other events. Now you’re showing horses again. What else is on the checklist of things you want to do?

JP: That is to be decided. I live life and see what shows up. Part of my value in life is adventure.