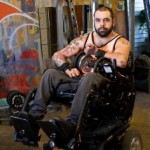 Fifteen years after Pete Rieke of Pasco became the first paralyzed climber to conquer Mount Rainier on his own power, he’s taking on a bigger challenge.

Rieke, a paraplegic, used his arms to power himself up Mount Rainier. But Calcavecchia of Olympia is a quadriplegic. He has only limited use of his arms.

Rieke describes the difference in terms of horsepower. If Rieke had a fifth the horsepower of an uninjured man his size when he climbed Mount Rainier, then Calcavecchia has one-twentieth.

But Rieke has a plan to satisfy Calcavecchia’s yearning to see the world from the top of a mountain.

Calcavecchia has been paralyzed since he was 19. He had graduated from high school in Olympia and was spending a season playing rugby in Sydney, Australia, when his neck was broken during a scrum. He remembers lying on the ground, freaking out as he looked at his arm that he could not get to move.

“I spent 11 years without being a physical person,” he said.

He was in a funk before he happened on a YouTube video of a quadriplegic with similar limitations who became a body builder.

During the next two years, Calcavecchia would build up an impressive set of guns beneath his climbing roses and Hello Kitty tattoos. His biceps bulge when he flexes, although the injury at his fifth and sixth cervical vertebrae leaves him without strength in his triceps on the back of his arms.

His life changed in other ways. He started playing wheelchair rugby with the Seattle Slam. But he wanted the freedom of seeing the world from the top of a mountain.

“I wasn’t planning to climb. I just wanted to be on top,” he said.

That was before his father, Richard Calcavecchia, a teacher at McLoughlin Middle School in Pasco, told him about a man he had once climbed with — Rieke.

Rieke broke his lower back when his gear malfunctioned while rock climbing in the Cascade Mountains in 1994.

As he recovered, he started thinking about how he could climb again. It had to be on his own power, with the least reliance possible on able-bodied help.

“If you just want to get to the top, you can have a helicopter drop you off,” he said. The point is the journey up the mountain.

Rieke, a chemist at Pacific Northwest National Laboratory, learned to weld and developed his machining skills, designing and building a “snow pod” on treads that he could hand-crank up a steep and snow-covered mountainside.

With the help of a support team, Rieke topped Mount Hood in 1998. On his third attempt, he reached the summit of Mount Rainier in 2000. In 2002, he and three other climbers on snow pods reached the top of Mount Shasta.

Rieke did not think much of Calcavecchia’s original plan to reach a mountain top. They were going to “drag his sorry butt up,” Rieke said.

“His exact words were, ‘You’re not going to enjoy this unless you’re doing it yourself,’ ” Calcavecchia said. “It changed everything when I met Pete.”

Now Calcavecchia’s goal is to make it to the top of a mountain on his own power, starting with Mount Adams, at nearly 12,300 feet, and then following in Rieke’s snow pod tracks up Mount Rainier.

Rieke hopes Calcavecchia can do that, but is maintaining some skepticism. He is engineering what he’s dubbed the “snow sled” with an electrical assist because he’s concerned that Calcavecchia may need some motorized help to make the climb.

“I’m determined to prove Pete wrong,” Calcavecchia said. And after seeing the first prototype of the snow sled this weekend in Rieke’s back yard, he’s more convinced that it’s possible to reach the summit without a motor.

Rieke has devised a system that will require a team to anchor a rope up ahead on the mountain. Calcavecchia can’t push well with his arms, but he can pull a lever back repeatedly that will reel in the rope and pull the snow sled up the mountain.

The goal will be a slow and steady pace to climb inch by inch, with another rope anchored and ready as soon as Calcavecchia makes it up one.

If he needs it, he can use a bank of lithium ion batteries charged by solar arrays in conjunction with his arm power.

“I’m going to utilize Simon to the maximum of his physical capacity and every bit of his mental capacity,” Rieke said.

The climb will be as green as possible and “demonstrate that people with a disability can do fairly impressive things with the right equipment,” he said.

The first prototype of the snow sled is to test the basic mechanics, including the transmission and the use of the small motor that is conventionally used to give an electric boost to a bicycle.

Rieke’s stepson, Eli Johnston of Portland, demonstrated it for Calcavecchia on Saturday. The system is mounted on wheels, and as Johnston pumps the lever back and forth, it turns a gear shaft, the rope winding across the sled.

The sled crept across the patio.

“The core mechanics are where we need them,” Calcavecchia said.

“I’m dang happy with the way it operates,” Rieke said. “It works much better than I thought it would.”

And it will need to be mounted on skis, so Calcavecchia can set an edge to bite into the snow as he traverses a mountainside.

Rieke’s next objective is to damage his initial model — to stress it and test it on steep slopes to see what will bend and break, so he can strengthen it to withstand a real climb.

“My real dream is to climb Mount Rainier like Pete,” Calcavecchia said.

They are starting with Mount Adams because it is not what they describe as a technical climb. Mount Rainier is steeper, has crevasses to get over or around, the possibility of rockfalls and avalanches, and a “chance of very, very nasty weather,” Rieke said.

Rieke expects to have a practice sled ready for Calcavecchia to take home to Olympia by winter to practice using with the team he has put together for the climb. They’re aiming to be ready for Mount Adams in the optimal snow window of May 2016.

Calcavecchia’s work will be to continue training to have the strength and stamina to make the climb. And he also will continue to raise money.

He has close to $5,000, enough to cover materials for the snow sled, but figures he will need $15,000 for the climb. He has promised, just as Rieke did on his climbs, to cover the cost of any of his volunteer crew’s gear that is lost or broken. He’ll also need to feed a crew of 20 to 30 people supporting the climb, some of them needing 7,000 calories a day.

He’s planning the “Clash of the Quads,” billed as the world’s first mixed martial arts fight between two quadriplegics, in Lacey on June 25. Proceeds from the fight with his friend Joshua Curtis will be used for the climb. People also can donate at simonsclimb.org.

Rieke is seeking some specific technical help for the snow sled. He would like input from someone with experience setting up solar arrays for the batteries and a specialist to develop instrumentation to measure the torque and speed to optimize the use of the batteries. He can be contacted through Calcavecchia’s website.

Calcavecchia is looking forward to being the first quadriplegic with his level of injury to climb a mountain more than 10,000 feet high.

“I’m more motivated then ever,” he said. “I’m more confident than ever. I’m living a life of passion.”