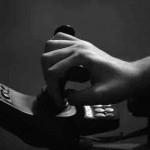 It was the beginning of a summer that promised to be one of his best ever.

Josh Basile loved his new job as a lawyer at a top medical malpractice firm in Washington. He was smitten with a pretty, dark-haired young woman he’d started dating. And he was planning a big party to mark a momentous milestone: the 10-year anniversary of the day a wave slammed his body head-first into the hard sand of a Delaware beach, crushing the fifth vertebra below his skull and transforming him instantly from an 18-year-old college tennis player into a young man who could not brush his own teeth.

Then, on a June day in 2014, an e-mail appeared on his iPad screen. It was from a clerk for U.S. District Judge Ellen Huvelle, a prominent federal jurist who had hired Basile for an internship more than three years earlier and remained a friend and mentor to him. Basile figured the note might be an invitation to lunch.

It wasn’t. The e-mail to the judge’s friends and colleagues said she’d suffered a horrible accident: Ellen fell down a flight of stairs in Boston on Friday evening . . .

The injury to her spine was severe. She’d already had emergency surgery, and her prognosis was unknown.

Basile stared at the words, sitting in his wheelchair at his home in Potomac, Md. For a moment, dread overwhelmed him. Then, his thoughts turned practical.

Where exactly, he asked, was she hurt? Basile’s own injury was concentrated at the C4 and C5 vertebrae — fourth and fifth from the top of the spine. The higher an injury, the more devastating the consequences. Please, he thought, let it not be that bad for her.

The answer came two days later: ­Huvelle had damaged her C4, C5 and C6 vertebrae. The same part of the spine where Basile was injured.

In a sense, Basile had prepared for this moment for 10 years. He’d made it his mission to help people devastated by sudden, serious spinal cord injuries, and he’d established himself as a widely recognized advocate. Basile’s nonprofit foundation, Determined2Heal, had assembled lists of resources and instructional videos and created a vast social mentoring network — called “SPINALpedia” — where the injured could connect with one another and learn to navigate the transformed landscape of their lives. Basile had survived, in part, by helping so many others do the same.

A 2004 accident left Josh Basile with no sensation below his chest. Helping others with severe spinal injuries became his mission.
A sickening crack

“These early days are so confusing and are filled with so many unanswered questions,” he wrote the judge. “These questions will be answered with time and should not be your focus.”

Basile doesn’t let himself think much about the very beginning — how he awoke in a hellscape of beeping hospital machines, rendered mute by the ventilator plugged into his windpipe. He revisits that place only to help guide others out of it.

[From the archives: A spirit the waves couldn’t break]

“I would love to hear your voice and share with you some of my personal experiences from the early days and discuss with you anything that’s on your mind,” he told her.

Huvelle read Basile’s e-mails as she lay in her bed at Lahey Hospital and Medical Center in Burlington, Mass., where she’d undergone emergency surgery to ease the pressure on her spinal cord and stabilize the three damaged vertebrae. Her husband, Jeffrey Huvelle, and their children, Nikki Milberg and Justin Huvelle — who first introduced Basile to the judge — stayed by her side.

Because he couldn’t visit, Basile offered encouraging messages and inspirational accounts of other survivors. He sent lengthy charts filled with equipment he recommended, complete with images and links for every item: a cupholder with a hand strap, a wheelchair ramp that fits in the trunk of a car, a voice recognition program with a legal vocabulary.

The judge was a formidable woman, and Basile knew she would struggle with the indignity of being utterly dependent on other people. But the uncertainty of her circumstances would be hardest to bear. She’d built a distinguished career dealing in clear information, firm answers. Now, there would be none.

Still, there was reason to hope: Huvelle was able to wiggle a toe, a crucial indication that a signal from her brain had forged a path through the damaged nerves in her neck to the muscles in her foot.

“Over the next few weeks and months it is so important to focus on what you can do rather than dwelling on what you cannot,” he e-mailed. “The fact that you have some movement below your level of injury provides so much hope, and I don’t want you to forget that.”

As he sought to reassure Huvelle, his thoughts kept returning to the days when he lay immobilized in a hospital bed at the University of Maryland Shock Trauma Center.

The Aug. 1, 2004, accident happened so suddenly, with such merciless finality. The sound has stayed with him, the sickening crack of bone shattering, how he heard it through the swirling water and from inside his skull. He still remembers the way the impact reverberated down the length of his body as the nerves went dark, like a string of lights blowing out.

The future of a life is sometimes determined by fractions of millimeters. If the brunt of the impact had shifted slightly one way, Basile might have fully recovered. A slight shift the other way, and he might be dead.

There is only what did happen: a burst C5 vertebra and a displaced C4, the bone crushed against the spinal cord and its vital nerve pathways that travel from the brain to the lower extremities. Basile was left with no sensation below his chest. He can shrug his shoulders. His left arm can move somewhat at the shoulder and the elbow. His right hand can push a joystick, but his fingers can’t grip a pen.

In the immediate aftermath of the accident, Basile’s mind was a heavily medicated haze of anguish and confusion. The temperature of his body fluctuated wildly, his nervous system in chaos. Asleep, he dreamed of running down steep hills, faster and faster until he lost control and knew there was nothing to do but fall.

But being alone was the worst thing — worse than the fevers and nightmares, even worse than not being able to breathe. So, in the sterile silence that settled long after visiting hours had ended, Basile would slip his chin beneath his neck brace and wiggle until the ventilator popped out of his neck with an angry hiss. The machines blared, and his chest tightened; it felt like drowning. But his desperate ploy was always successful. The nurses would come running, and then they would be beside him, touching him, putting the ventilator back in place. When they left, he clicked his tongue frantically, a voiceless plea: Come back, come back.

Josh Basile meets with his mentor, U.S. District Judge Ellen Huvelle, at her chambers in Washington. Last year, she fell and injured her spine in almost the exact same place as Basile. 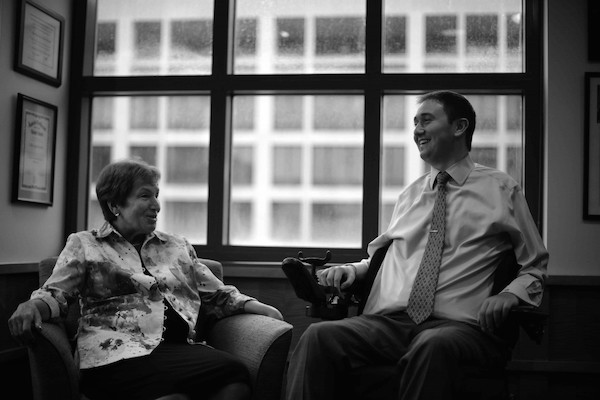 Basile had hoped that Huvelle would be here, among the 30-some people gathered in a cozy back room of an Italian restaurant in Bethesda, Md., where his long-planned anniversary party was finally underway.

But as Basile celebrated a decade’s worth of hope and healing, Huvelle was enduring the early weeks of her own grueling recovery.

He sat facing his guests, a perpetual smile on his round, boyish face. His tall frame was secured in his wheelchair with straps, woven through slits in the sides of his button-down shirt. Beside him, his girlfriend, a 30-year-old analyst for the U.S. Department of Education, gently lifted a straw to his lips when he gestured toward his water glass.

“If you were invited here tonight, it’s because you are a VIP in my life,” Basile said in a faintly raspy voice, a permanent result of weakened lungs.

He thanked his mother, Nedra Basile, for sleeping in his room for two and a half months while he lived at National Rehabilitation Hospital in the “darkest days” of his recovery. He thanked his father, John Basile, who renovated his stately home to make it fully wheelchair-accessible and had lived with his son since he came home from the hospital. Their relationship, Basile said, “is one of the best things my injury has given me.”

Basile thanked his devoted big sister and his rotating staff of three round-the-clock aides. He thanked the old friends who’d pulled his limp body onto the sand, and the new friends with whom he had a spinal injury in common.

He turned finally to his new girlfriend, who smiled as their eyes met. “We’ve really connected, and I’ve really fallen for her. I love every single moment we spend together.”

He faced the group, his face flushed and his voice almost gone. “I’m the luckiest one,” he said.

The moment was everything he’d hoped for, despite the few important people missing — his former tennis doubles partner, a few dear friends from rehab. And Huvelle.

Basile knew what he would have said if she had been there, how he would have paid tribute to her for offering him a coveted internship in her chambers, where the conference room was transformed into a wheelchair-accessible workspace and her office door was always open to him. He’d already sent her the words: I can never thank you enough for all that you have done for me. . . . I would not be where I am today without you in my life.

Basile enjoys a tender moment with his then-girlfriend at a party in Bethesda, Md., to mark the 10-year anniversary of his injury and to celebrate a decade’s worth of hope and healing.