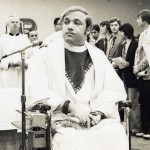 Father William Atkinson a “tremendous witness to the rest of us”

PHILADELPHIA (ChurchMilitant.com) – The cause for canonization for the first quadriplegic man ordained a priest has received the support of U.S. bishops.

At the annual fall General Assembly in Baltimore, Maryland, the U.S. Conference of Catholic Bishops (USCCB) voted unanimously to support the cause for sainthood for Pennsylvania native Fr. William Atkinson.

“The USCCB voted and unanimously agreed that his cause should move forward,” said the Rev. Anthony DiGuglielmo, vice chancellor for the archdiocese of Philadelphia.

The case was presented to the conference by Philadelphia archbishop Charles Chaput, who had previously announced his formal support for the cause in September. Chaput stated his belief that the cause would be a “beautiful one” as it would be “a source of encouragement for people with this kind of accident in their lives, this kind of disability.”

William Atkinson, born in Philadelphia in 1946, was a young Augustinian novice in February 1965 when he broke his spine after a toboggan he was riding hit a tree. The accident left Atkinson almost entirely paralyzed from his neck down, retaining limited movement of his head, neck, shoulders and arms.

Despite this, Atkinson expressed a desire to continue with his studies and remain an Augustinian. Following a year of rehabilitation, he resumed his formation and, with assistance from both the Villanova University theology department and friars from the Washington Theological Union, completed his theological studies. After receiving a special dispensation from Pope Paul VI, he was ordained to the priesthood by Cdl. John Krol of Philadelphia in Upper Darby, Pennsylvania on February 2, 1974.

Father Atkinson worked at Msgr. Bonner High School in Drexel Hill from 1975 to 2004, teaching theology and acting as the assistant school chaplain, senior class retreat coordinator, moderator of the football team and director of the after-school and Saturday detention program. He earned a reputation within the school for his compassion, sense of humor and zeal for life, with a former student calling Fr. Atkinson the most active person he knew. One of the friars who spent years assisting Fr. Atkinson quoted the priest as comparing life to a card game: “You either play with the cards that you have been dealt or you fold, and I am not ready to fold.”

He received countless awards over the years, including an honorary doctorate from Villanova University in 2000.

On September 15, 2006, Fr. Atkinson passed away at age 60, surrounded by those who had cared for him for decades; he was buried in the Augustinian section of Calvary Cemetery in West Conshohocken, Pennsylvania.

The road to canonization was spearheaded by the Rome-based postulator general of the Order of St. Augustine, the Rev. Josef Sciberras, and the prior provincial of the Province of St. Thomas of Villanova, the Rev. Michael DiGregorio, who met with Abp. Chaput in September and presented the official documentation and request for the canonization process to begin.

In addition to the formal written request, “a short biography of Father Bill and a list of 53 individuals as witnesses able to offer testimony on behalf of the cause” were given to the archbishop, according to Fr. DiGregorio.

“Obviously, we are delighted that the cause is underway, and that we will have the opportunity to make the life and virtues of Fr. Bill more widely known,” Fr. DiGregorio said. “We rely very much on the friends and acquaintances of our brother to spread knowledge of him, to assist us in collecting data that can further the cause, and recommend his intercession to those in need.”

However, the road to canonization can be long and tedious, as much documentation must be collected and analyzed by censors, which are often times various theologians from around the country. Should the censors affirm that none of the findings oppose Church teaching, a report will be sent to Abp. Chaput.

If the archbishop accepts the report, the case will be sent to the Congregation for the Causes of Saints; this body would then recommend to the Pope whether Fr. Atkinson should be considered “venerable,” the second of four potentially long stepping stones in the road to canonization.

But according to Fr. DiGregorio, “There is no time line.”

The priest is confident, however, that the life of Fr. Atkinson will speak for itself.

“He was a tremendous witness to the rest of us by both his sense of purpose, his perseverance as well as the full integration into the ordinary aspects of our lives,” Fr. DiGregorio continued.

“Everybody talks about carrying your cross,” says the Rev. Robert Hagan. “He wasn’t just carrying it. He was rising from it and found the joy in his life.” Father Hagan, the current associate athletic director at Villanova, credits Fr. Atkinson with inspiring him to leave his job as an attorney and become a priest.

“The Church needs people that we can hold up as examples of people who live the Faith in an extraordinary way,” Fr. Hagan continued. “[Fr. Atkinson] certainly is one of those people.”

Mass was offered at St. Mary Magdalen Church in Upper Providence, Pennsylvania on November 1, All Saint’s Day, in honor of Fr. Atkinson’s declaration as a Servant of God.

Joseph Pelletier is a staff writer for ChurchMilitant.com