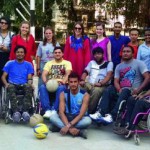 It is believed that to achieve success in life one needs to be physically and mentally fit. But Nikhil Kumar Guptaa’s inspiring story will tell you that the will to achieve is equally important along with strength. A software engineer by profession, Nikhil met with an accident that left him paralysed in 2008. His world almost came to a dead-end but he did not let his will to survive die. “The doctors told me that quadriplegic patients like me will always be dependent on others to do their day-to-day activities,” shares Nikhil.

It was during physiotherapy sessions at the Indian Spinal Injuries Centre in Vasant Kunj that he found out about wheelchair rugby and was motivated to start playing it. Nikhil says, “During my recovery period after the accident, I watched a film titled More Than Walking by American filmmaker Jonathan Sigworth who had become a quadriplegic after falling from a very steep hillside in Himalaya in 2005. He had come to India for a gap year programme when the accident took place. But, unlike me, he was doing his chores himself. I was so inspired that I contacted him over email.”

Jonathan spoke to Nikhil and taught him various ways to become self-independent. “He told me how with the help of balance and little muscle strength I could gain basic freedom to do things like transfer myself from bed to wheelchair and dress myself. That boosted my confidence a lot and gave me a positive outlook towards life,” shares Nikhil and adds, “It also got me thinking that there are numerous people like me in India who could lead a normal life with some basic help.”

The initiative aims to restore a vibrant social identity and independent living skills for those with disabilities, especially with spinal cord injuries. Nikhil states, “Our goal is to get quadriplegics to think of themselves as whole people again, independent and able to find jobs and live in the community. The understanding between us is good because we are all going through the same problem. So, it becomes a community that is helping each other to overcome disability.”

The organisation relies on a peer mentoring approach. At the heart of his effort is the ESCIP house, a first-of-its-kind in India transitional living apartment for quads in Delhi. Nikhil shares, “Firstly, we wanted to help people understand that just because you’re in a wheelchair doesn’t mean you’re a fragile person… it doesn’t mean you can’t take control. Also, provide a facility that is fully equipped with new-age technology to help us get better training. That is when Jonathan suggested to have a transitional living home that’s run by mentors instead of therapists or hospital staff.”

Through rugby camps and online mentoring ESCIP has trained more than 200 people to lead an independent life from the past one and a half year. “We have also associated with Indian Head Injury Foundation, so that patients who connect with us can get better treatment from the physiotherapist and doctors,” points out Nikhil.

Going forward he aims to create mentors across the country so that more wheelchair-bound people can actively do their chores easily. He says, “Right now our reach is restricted to Delhi-NCR region. In 2016, the aim is to help people from other cities also because disability should not become a deterrent to lead a normal life.”