Amy Van Dyken-Rouen, from Olympian to paraplegic to inspiration 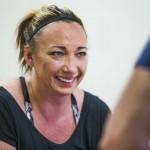 Even when life becomes too hectic for Amy Van Dyken-Rouen, she finds a way to progress in her spinal cord rehabilitation.

For 2 ½ months, she was traveling so extensively for speaking engagements that her weekly work with physical therapist Al Biemond at Barrow Neurological Institute in Phoenix had to be put on hold.

Thrust into a role as a spokeswoman for spinal cord injury research because of the fame that comes with six Olympic gold medals, Van Dyken-Rouen accepts her obligation to fly around the country — never easy or painless — to spread a message that many other paraplegics aren’t invited to deliver.

Van Dyken-Rouen, paralyzed from the waist down after a 2014 ATV accident, recently traveled to Tampa, Fla., to speak to the American Association for Respiratory Care Congress and to thank respiratory therapists for their work with asthmatics, her major hurdle as a competitive swimmer.

Then she was keynote speaker at the Colorado BioScience Association awards dinner in Denver.

“It was a bunch of really smart people,” she said. She told them, “for the first time ever in my life, I’m intimidated by you people, so bear with me if I kind of ramble.”

“But these are the people that are making breakthroughs,” she said. “I had an opportunity to be up there and tell the people who are going to find a cure for Parkinson’s and ALS and spinal-cord injuries to not stop, to keep trying. I might be allergic to guinea pigs, but I would love to be one. For the community that would benefit from that, a cure is coming in our lifetime.

Van Dyken-Rouen kept up with the homework assignments she was given by Biemond during her excused absences from physical therapy. She also made gains from her workouts at CrossFit 480 in Scottsdale. There, she said, owner Derek Kneadler “has been working on my core and not allowing me to use the back of my (wheel) chair to hold me up when I’m doing exercises. Even when I’m on the sofa watching whatever, I’ll try lifting my leg or wiggling my toe.”

All of that was leading up to Nov. 30 and her return to Barrow. Six months earlier, one year since her accident, Van Dyken-Rouen was walking with the motorized help of an exoskeleton. She soon moved beyond that to walking in a brace that extended up to the middle of her back for support.

“The upper part was really annoying me and I’d had enough of it,” she said. “Al said if it’s easy to take off, let’s try it. It was kind of a shot in the dark. This was now using all of my core muscles so there was a good chance I was going to collapse and fall down.”

Instead, she remained upright and, using a walker, took her first steps without the upper brace to lean back on.

“It was all me,” she said. “Now I’m having to use my core muscles to hold me up, stand up straight, then throw my legs forward. This is a really big deal for people with my injury. Al didn’t think we were going to be able to do this this soon, if ever.”

To get technical, Biemond said, Van Dyken-Rouen has changed from using a reciprocating gait orthosis brace to a knee-ankle-foot orthosis brace because of her improvement in function, something the insurance provider looks for to keep paying for treatment.

“It’s impossible to predict with any certainty what’s going to happen next,” Biemond said. Except that after more than a year working with Van Dyken-Rouen, Beimond knows not to underestimate her will. “We haven’t hit a plateau. It’s been a great run for both of us. I’d like to keep it going.”

National media outlets, particularly the “Today” show and “TMZ,” continue to closely follow Van Dyken-Rouen’s story. She jokes about a bromance between “Today” host Matt Lauer and her husband, Tom Rouen, and how NBC might ask Tom to work at the 2016 Rio Olympics and allow her to tag along.

She plans to attend the U.S. Olympic Swim Trials from July 26 to July 3 in Omaha, Neb. Her Amy Van Dyken Foundation, created to help people with spinal cord injuries, continues to evolve, with plans to pay for training assistance dogs to help those with mobility impairments.

Early on her 2016 agenda is visiting with Dave Denniston, a friend for 20 years who, better than almost anyone, understands how dramatically her life has changed in the past 18 months.

An elite swimmer who came close to qualifying for the 2004 Olympics, Denniston suffered a broken back in a sledding accident in 2005 that left him paralyzed from the waist down. His injury is almost the same as Van Dyken-Rouen’s, except “she’s getting a lot more muscle control back than I ever did,” said Denniston, who also has done extensive motivational speaking through his company, Mind Over Body.

Van Dyken-Rouen was swimming at Colorado State and Denniston was at Arapahoe High School in metro Denver when they became friends. When Denniston became paralyzed, Amy and Tom, then an NFL punter, supported Denniston and helped with fundraising. Now, Denniston is returning the love.

“Amy is the first friend or family member in my life to experience a spinal cord injury,” Denniston says. “That’s put a lot of things in perspective for me about what people experienced around me. It’s opened my eyes that this is really hard for not just the person it happens to, but those who care for them. I’m grateful for the opportunity to give back to her after she gave so much to me the first three to four years,” the time it took him to become fully independent.

Denniston swam in the 2008 Paralympics and coached the U.S. Paralympic swim team from 2010 until May 2015. He now is an assistant coach at the University of Wyoming, which swims at Arizona State on Jan. 16, when he and Van Dyken-Rouen can catch up in person.

“She’s doing all the right things as far as I’m concerned,” Denniston says. “She doesn’t sit at home and feel sorry for herself. She’s still active in everything she does. That’s the right way to take it on. Every time I see something she posts (about her recovery), I think, ‘Dang Amy, that’s awesome.’ ”