Paralyzed ex-football player celebrates injury’s anniversary: ‘I was reborn on that day’ 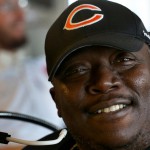 Kenneth Jennings doesn’t see why he shouldn’t celebrate the day he took his final steps and moved his arms for the last time.

He even has a term for it.

On Oct. 8, 1988, Jennings, then a junior at Simeon High School, suffered a broken neck on the opening kickoff of a game against Corliss. The collision left him a quadriplegic. He faced a future unable to move anything from the neck down. And it wasn’t supposed to be a long future. At the time, doctors gave him only 10 years to live.

Jennings, though, never views that day as the worst in his life. Quite the contrary.

“People say, ‘How can you celebrate a tragedy?’ ” Jennings said. “I say I was reborn on that day. Everything I had was taken away from me. I was like a newborn. I had to relearn everything. How to talk. How to breathe on my own. A new way of life. Every year that I’m still here, (the re-birthday) is a way of thinking that God gave my life back to me. How do you not celebrate a gift?”

In more conventional birthday terms, Jennings is 45. It has been nearly three decades since the Tribune published a three-part series about him in June 1989 chronicling his transition to a new life with his work at the Rehabilitation Institute of Chicago.

As so often happens, after the initial burst of publicity, a person fades from view, never to be heard from again. But people should hear the rest of Jennings’ story.

Jennings now dedicates a good portion of his life to giving back. He returned to Simeon this fall as an assistant football coach. With the help of caregivers, he lives alone in a house on the South Side. But Jennings often has company, allowing troubled inner-city students to crash in his extra bedroom if they have nowhere else to go.

Jennings also has a foundation, Gridiron Alliance, whose mission is to ensure high school athletes have insurance to cover the huge expense of catastrophic injuries. Jennings was instrumental in getting Illinois to pass legislation providing the coverage in 2013. In April, he received the Governor’s Volunteer Service Award.

“Life is not about us,” Jennings said. “We all need to get help. God has brought many people into my life. I’ve had so many people help me. Why wouldn’t I do it for others?”

Jennings spends Tuesdays working with patients at the RIC. Blowing through a tube, he navigates his wheelchair through a maze of people at the facility. He uses a mouth stick to operate a computer. His phone is constantly buzzing with incoming texts.

There are flecks of gray in Jennings’ beard, and he has the paunch that often comes with middle age.

Occupational therapist Janet Bishof-Rosario saw the younger, leaner version of Jennings, working with him in the days just after his injury. She still remembers his attitude.

“A lot of kids in that situation are angry,” Bishof-Rosario said. “I never picked up any anger in Ken. He wanted to keep going. He always had a goal in mind.”

Jennings tries to share that positive attitude in RIC’s LIFE Center peer mentor program. Lisa Rosen, manger of the program, said Jennings is playing an important role in working with people who have suffered similar injuries. Jennings said he knows what it is like “to have the carpet pulled out from under you.”

Jennings wheels into the room of Austin Beggin. Just two weeks after graduating from Ohio State, the 22-year-old suffered a broken neck in a diving accident.

Beggin, wearing an Ohio State shirt in a room liberally decorated with Buckeyes gear, often talks about sports with Jennings. Yet their other common bond is apparent when the discussion shifts to the intense anxiety they shared about being weaned off a ventilator after being injured.

“Life is not about us. We all need to get help. I’ve had so many people help me. Why wouldn’t I do it for others?” – Kenneth Jennings

“I appreciate the help from my family and loved ones, but one of the biggest things I’ve dealt with is that none of them know what I’m going through,” Beggin said. “Ken went through every step I did. He told me, ‘This will change your life, but it won’t keep you from doing what you really want to do.’ To see someone like Ken out there doing it is so reassuring. This isn’t going to keep me down.”

Beggin, who arrived at the RIC in late July, was discharged Nov. 18.

Jennings has shown it is possible to be independent despite his condition. With the exception of having caregivers in the morning and at night and friends who assist with driving, he is on his own. His house is set up so he can operate everything remotely with his mouth stick.

Jennings also is the father of a 22-year-old daughter, Denise, who lives in Indiana. He said he is estranged from her mother (they were never married) and sees Denise occasionally. He talks of getting married one day but adds, “I’m not sure I want to give up my independence.”

This isn’t to say Jennings hasn’t had his challenging moments. The worst probably occurred after he graduated from Simeon. He tried to attend Southern Illinois, but accessibility on campus remained an obstacle he couldn’t overcome. When he returned home, he found himself with too much idle time on his hands. Jennings doesn’t like to use the word “depressed,” but he admits to being down. One day, he simply went out the front door and wheeled around for several miles, ending up at Gately Stadium, the site of his injury.

Jennings eventually realized there was only one way to pull out of his funk: Get busy.

“I hate it when I’m not busy,” Jennings said. “Just sitting around drives me crazy. I have to be doing something.”

Jennings’ multiple hospitalizations have made finances a problem. He said paying hospital bills and the expenses of daily in-home care exhausted much of the multimillion settlement he received from a lawsuit against the Chicago Board of Education and a physician. Some of his money concerns recently have been eased by an insurance policy he receives through his father’s veterans benefits and by learning through RIC’s LIFE Center that he is eligible for state assistance for his home care.

Jennings, though, knows other athletes with similar injuries aren’t as fortunate. While he is pleased that the state of Illinois has a $3 million catastrophic injury insurance policy for high school athletes, he wants legislation making it a requirement at the national level.

Jennings, though, knows other athletes with similar injuries aren’t as fortunate. While he is pleased that the state of Illinois has a $3 million catastrophic injury insurance policy for high school athletes, he wants legislation making it a requirement at the national level.

“Nobody knows if an athlete (suffers catastrophic injuries), a school’s insurance policy won’t cover all of the costs,” Jennings said. “This year, there have been 18 kids (throughout the country) who either had spinal-cord injuries or trauma to the brain. It’s unfortunate, but it’s going to happen. Football is a violent sport.”

Yet despite what happened to him, and the subsequent research about concussions that came to light long after his injury, you will be hard-pressed to find a bigger advocate of playing football than Jennings. He has been around the game for many years as a coach at several levels and relished the opportunity to work with the defensive line at Simeon this year.

Jennings says the benefits of playing far outweigh the risks. He talks about football fostering discipline and teammates helping each other, and how that carries over to everything else in life.

“Everything I do is surrounded by football,” Jennings said.

So don’t bother asking if Jennings ever has any regrets about covering that kickoff on that October day in 1988. It is the one question he gets repeatedly.

To know Jennings is to know his answer.

“I’m truly blessed to be able,” Jennings said. “Whatever able is, God blessed me to be able to do it. I believe that. There’s no doubt in my mind God left me here for a reason.”

By Ed Sherman
On media

Life goes on after acquired disability