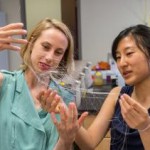 Imagine a future when people who have been paralyzed can move their arms and legs again.

Researchers at the University of Washington aren’t just imagining that day. With a new $16 million grant, they’re developing technology that could reanimate paralyzed limbs in the not too distant future.

The Center for Sensorimotor Neural Engineering, a UW-led effort that includes researchers from the Massachusetts Institute of Technology, San Diego State University and other partners, is developing implantable devices that can send signals between regions of the brain or nervous system that have been disconnected due to injury.

The National Science Foundation recently renewed the center’s funding and awarded it $16 million over the next four years to support the research.

The center’s goal is to achieve proof-of-concept demonstrations in humans within the next five years, CSNE director and UW professor of computer science and engineering Rajesh Rao said. This will lay the groundwork for eventual clinical devices the center hopes will be approved by the Food and Drug Administration, in collaboration with industry partners.

Rao said the implants can pick up brain signals and send information to other parts of the nervous system, essentially creating a new artificial pathway around damaged areas of the brain or nervous system.

He said such technology could have helped actor Christopher Reeve, who sustained a spinal cord injury due to a fall from his horse and was paralyzed.

“His brain circuits were still intact and able to form the intention to move, but unfortunately the injury prevented that intention from being conveyed to the spinal cord,” Rao said. “Our implantable devices aim to bridge such lost connections by decoding brain signals and stimulating the appropriate part of the spinal cord to enable the person to move again.”

Year after paralyzing injury, player strides back to Cornell

Helper monkey is a blessing for California quadriplegic