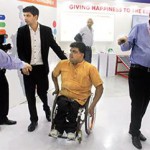 It is one thing to believe that it is your responsibility to inspire, but driving over 5000kms to reach out to thousands of speciallyabled citizens from the southernmost tip of the country to its northernmost boundary is a pure act of heroism.

Not to forget the perils of spending long arduous months on the road and staying away from loved ones. And to do all this while seated in a wheelchair… is there an adjective that can do justice to such a whole-hearted endeavour? Harry Boniface Prabhu is not in it for the praise, applause and appreciation, anyway.

“I want to educate the disabled. Show them that the world is a wonderful place and help them get rid of their insecurities,” Boniface said earnestly.

His odyssey will take him to 10 cities, starting from Kanyakumari in April and ending in Kashmir about 45 days later.

“I will meet thousands of people in these cities and try to motivate them. I will be visting schools for specially-abled children too and also the principals of normal schools to educate the normal people on how to deal with the speciallyabled,” Boniface, who was in the city for the last day of the ‘Make in India Week’, told Mirror.

The 43-year-old Padmashree is famous for his exploits as a quadriplegic wheelchair tennis player, having played in some the most prestigious tournament in the world — Australian Open, US Open and Wimbledon to name a few. He has also a Paralympian, having represented the country in athletics, shot put, badminton, javelin throw, table tennis, shooting and discus throw.

The Banglorean has been an inspiration with his exploits despite being quadriplegic since age four. “When I roll the wheelchair even a small stick on the floor is an obstacle. But life is very beautiful. And every human has a right to live with dignity. I see people give up sometimes. I want them to see me and say, ‘If Boniface can, I can’,” a childish enthusiasm roared in his voice.

Boniface’s mission includes promoting and spreading the use of sign language in India, understanding the aims and aspirations of the differently-abled with a view to influencing public policy, creating a platform for the exchange of ideas and sensitising people and policy makers to the needs and requirements of the specially-abled. “This might also end up becoming a record of the first quadriplegic driving this distance,” Boniface chuckled.

But camouflaged behind the energy and optimism was a grave personal loss. “Two weeks back I lost my dad. He used to tell me God has made me for a purpose. He was my athletics coach. “He was suffering from a lung infection and was in the ICU for around 23 days.

“Before his last breath he showed me a thumbs up from his bed,” said Boniface.

“I don’t want to get emotional.” Back to the mission, Boniface’s car will have majority functions that allow hand control. “The car is under modification to suit my needs. It will have hand control with auto transmission. It will be abigger car with wider road clearance. I want more space for my wheelchair and toilet related stuff,” said Boniface , who will be acconpanied on the journey with close friend Murali Rao and the Thums Up team that are facilitating the endeavour.

Lawyer works to keep a positive outlook on his quadriplegic status