After car crash, man with quadriplegia shares his story with students 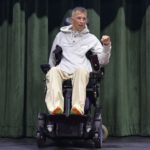 It was a hot summer night, and Skinner was in the passenger side of a car, leaving a wedding reception and riding to another party just two miles down the road. Beers popped open as Skinner and his friends listened to “Crash Into Me” by the Dave Matthews Band. Skinner took his seat belt off to stick his head out the window.

On the very last turn before getting to the house, the driver was going 55 mph, even though there was a yellow caution sign that said 35 mph.

As the car rounded the turn, the driver lost control and Skinner was thrown out the window as the car flipped over 2 ½ times.

Skinner remembers lying in a ditch, realizing he was having trouble breathing and that he couldn’t move.

Thirteen days later, Skinner woke up from a coma to his new reality, his new life. He had four bolts screwed into his head, was on a ventilator and had over a dozen tubes connected to him, keeping him alive.

Now at the age of 37, Skinner, “a complete quadriplegic,” shares his story through presentations to middle school, high school and college students.

On Thursday, he told his story to students, faculty and other guests at the Virginia Highlands Community College in Abingdon, Virginia.

“Today is an outstanding day. … Chris’ message will change your life; he’s changed mine in many ways,” said Brandon Dotson, dean of enrollment, management and student services at VHCC.

Dotson has known Skinner since they were at Radford University for their undergraduate years.

“Chris has shared his story of tragedy to triumph … with people of all walks of life,” he said.

Skinner now lives in Myrtle Beach, South Carolina, with his wife, Suzie, of 13 years and their two children. They have 10-year-old twins, a son named Caleb and a daughter named Alethia.

Suzie and Chris met after his accident — she was his physical therapist.

“She never knew me as a walking person,” Skinner said. 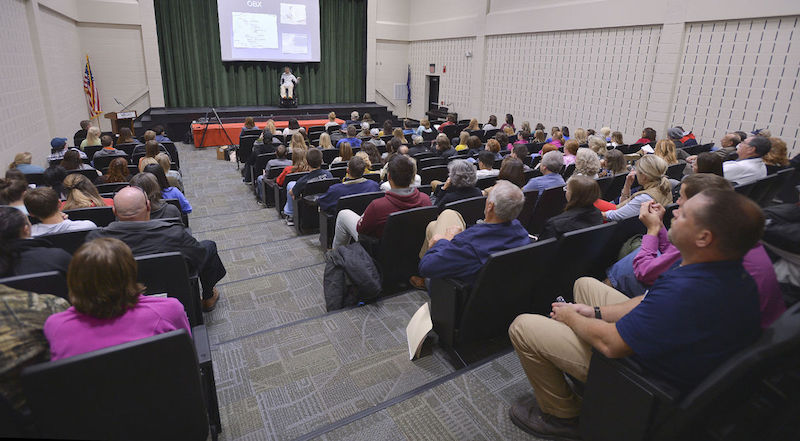 Skinner is a graduate of Radford University and earned both a bachelor’s degree in interdisciplinary studies and a master’s degree in counseling and human development. He also received a master’s in Christian education from Dallas Theological Seminary.

In 2013 he was presented with the “Courageous Man Award” by the North Carolina Boy’s Academy, in Conover, North Carolina. Skinner was also named the National Spinal Cord Injury Association Hall of Fame’s “Emerging Leader” in 2007.

Skinner has written a book about his life story, “The Ultimate Learning Experience.” It’s a detailed account of his story.

“It’s a universal message. It’s the fact that anyone’s life can change in a snap of a finger,” Skinner said. “I’m sure of that — because mine did.”