Long after his accident, Sam Schmidt takes the wheel again thanks to Project SAM 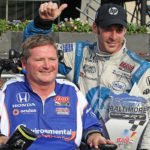 Sam Schmidt was paralyzed in a testing accident in 2000. Now he can drive again.

In the late 90s, Sam Schmidt had a promising career as an IndyCar driver, finishing fifth in the championship in 1999 after taking his first win in Las Vegas. In off-season, however, his ascension in the sport was derailed. During testing that following January, an accident at Walt Disney World Speedway in Florida left Schmidt a quadriplegic.

In the years since, Schmidt has continued to go racing but as a team owner. He’s watched from the pit as drivers like Simon Pagenaud and James Hinchcliffe brought home glory for Schmidt Peterson Motorsport. But recently a collaboration with his team’s title sponsor, Arrow Electronics, has placed Schmidt back where he belongs—behind the wheel of a car on track.

The car is a 2014 Chevrolet Corvette Stingray, and the initiative is called Project SAM for “Semi-Autonomous Motorcar.” However, don’t be fooled into thinking this is a self-driving vehicle. Instead, the core of Project SAM is about mapping the dynamic range of the car’s inputs—steering, throttle, brake—and translating them to a different control format, in this case one suitable for a quadriplegic driver. “We needed to be able to control any feature of the car by using electronic signals and software,” said Chakib Loucif, Arrow’s VP of engineering.

Motors control the steering column, accelerator, and brake pedal (Project SAM is a Corvette with that much-talked about eight-speed automatic transmission). On top of that is a whole lot of extra wiring added to the Controller Area Network, or CAN. Arrow installed its own CAN gateway to avoid upsetting the Corvette’s electronic homeostasis.

“Phase one made the car ready to be controlled by electronic signals—by zeros and ones,” Loucif said. The gateway is coupled to an “industrial 4G LTE modem, sensors—wearables and biometrics that Sam Schmidt and his passenger will wear—and those all connect to the Web using things like Microsoft’s Azure or IBM’s Watson data platforms. With Internet connectivity, we can display car diagnostic information. And because we built our own CAN gateway, we have access to any information we want from the car.”

Arrow at large is involved in the Internet of Things, so naturally Project SAM utilizes online widgets that can display the car’s speed, the amount of steering angle Schmidt is using, driver and passenger heart rates, and so on. 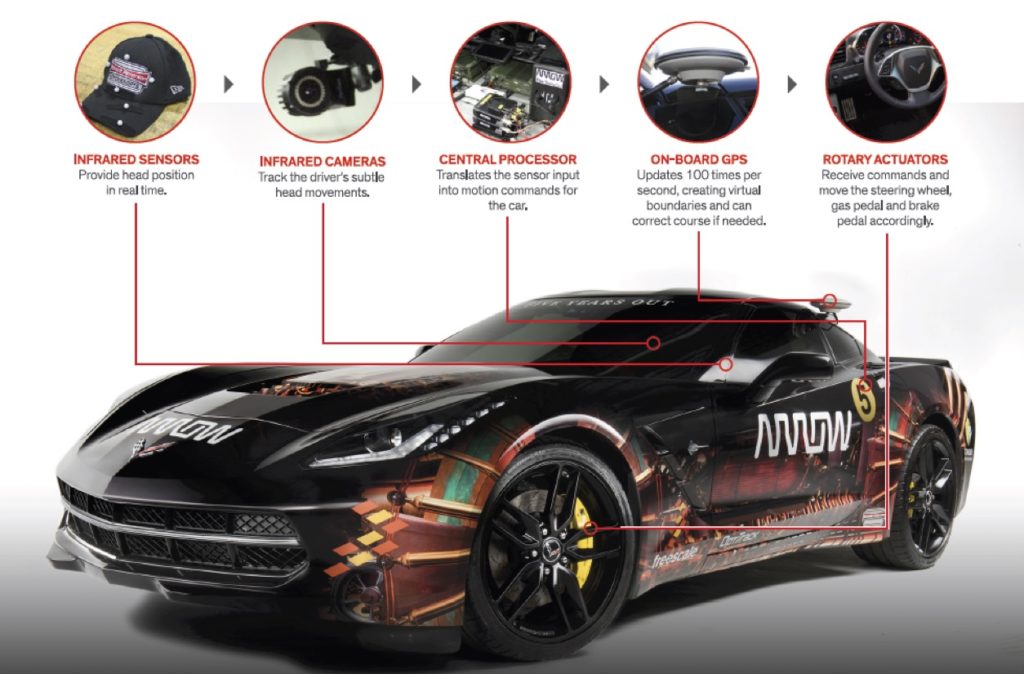 Phase two meant solving the question of anyone being able to drive Project SAM as long as they were given the ability to send the right messages and the right controls to the car. The steering is motion-capture controlled. An array of infrared cameras tracks the driver’s head in real-time, keying off reflectors attached to a baseball cap that Schmidt wears in the car.

Getting it to a workable state “was a challenge, for sure,” said Noel Marshall, the lead engineer on Project SAM. Steering inputs tend to be proportional to one’s speed. You can use a lot more steering angle in a car at low speed than you can redlining in sixth gear, but to make a car drivable, the driver has to feel comfortable with it throughout the speed range. (And lest we forget, that range is going to be a pretty wide one for a talented driver like Schmidt.)

“It was a lot of trial and error to see what worked and what didn’t for that full range of motion,” Marshall said. “Originally we were using a head-tilt, so you would nod or tilt your head to the left or right. That’s not a large range of motions, so we decided to change it to turning your head left to right. That’s a greater range and it proved to work really well.” She added that the advantage is the driver will always be looking in the direction they want to corner.

“Plus, you didn’t need to have your head always resting on the headrest,” Loucif said. The steering input is proportional to speed. “If the car is going at 100mph, obviously we narrow the dynamic range—the ability of the car to take a 90˚ hard angle, for instance,” he told us. Rest assured, hairpin turns are quite possible at lower speeds.

To go or stop, the original concept used head movements to adjust speed via a cruise control function. “it didn’t provide fluid control of the vehicle. Now we use sensor technology with a sip-and-puff mechanism that our engineers designed. You blow on the tube and the car accelerates proportionally. You have micro-control of the speed, the same way you would with the pedal,” Loucif said.

Braking works in reverse. Stop blowing and the car will coast until it stops. Suck on the tube and it applies the brakes. When Schmidt drives the car, he actually has the control scheme reversed. According to Loucif, “he likes to suck on the tube for acceleration, and then blowing on the tube is to brake. For us it’s a simple software command that says ‘here’s the configuration that the driver wants.'” 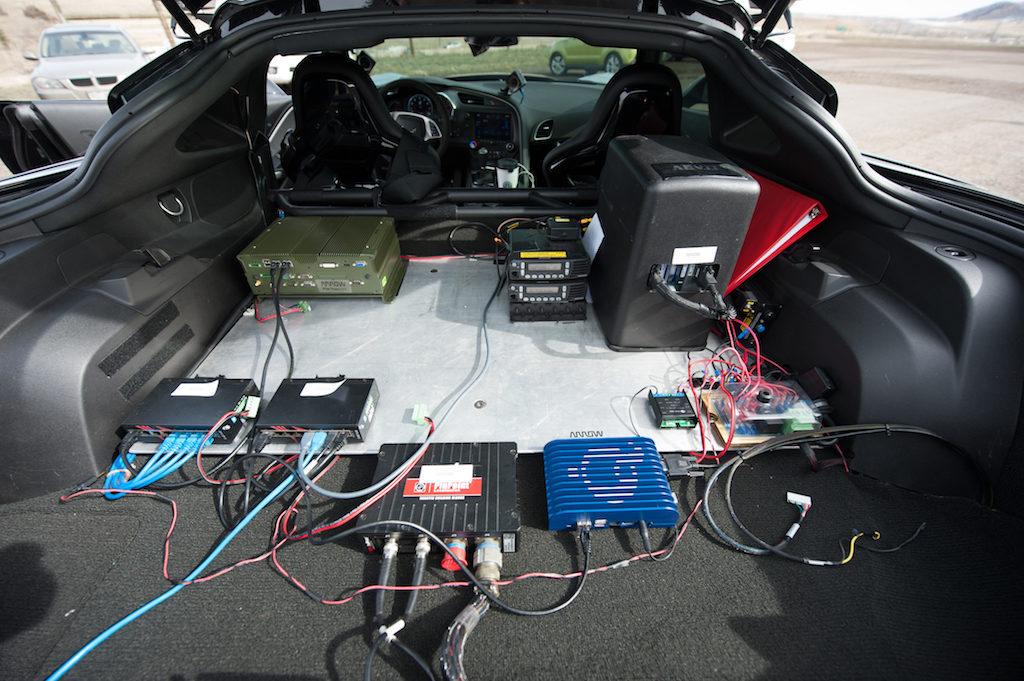 Project SAM first debuted at the 2014 Indianapolis 500, when Schmidt took to the track ahead of the race for some demonstration laps. Since, it’s also been on track in California, at Long Beach, and more recently at the Sonoma Raceway. As well as proving capable at the twisty stuff, it was also the first time Schmidt was able drive the car from the garage onto the track. Previously, the car would be pushed from the garage to the pit road.

“Now he can do that all himself, navigates within the crowd, does everything, gets it to where it needs to go. At Sonoma, he literally parked the car in reverse under an tiny awning,” Loucif said. “By the end of last year, the team has done a great job of advancing the technology—a whole lot was software—that inherently provides a more normal driving experience for Sam, or anyone like Sam.”

The team didn’t want to just provide a safe driving experience for Schmidt, they wanted to let him drive the car the way a racing driver would. “We had to widen the dynamic range to enable Sam to drive the way he knows how to drive a race course,” Loucif said. The current Project SAM car uses a dual-antenna GPS system (accurate to 100mm) which was being used to geofence the Corvette on track to prevent it from hitting the walls. “On the street, you do want all of those things. On a race course—well, the way you drive a race car is different to the way you drive a regular car,” he said.

We’re told Schmidt plans to get his driver’s license, although Project SAM will need some additional safety mechanisms based on state-specific DMV rules before it’s properly street-legal. “We’ve been thinking about that for some time. We believe we have an answer—all I can tell you is it’s well underway,” Loucif said. He noted there’s even a new generation Project SAM under construction in Germany, but Loucif and Marshall were tightlipped on anything beyond that.