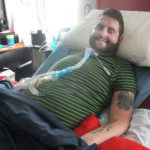 In a few days, Drew Cumpson will be marking the fifth anniversary of an event that dramatically changed his life — but one which he can’t remember.

If he needs to recall the exact date, he only need look at his left arm. Tattooed there is “05/10/11,” along with the words by which he has tried to live ever since: Keep Fighting, Keep Smiling, Stay Strong.

It is all a reminder of the trip Cumpson took to Peru back in May 2011 where a freak accident left him a quadriplegic.

The Sydenham High School graduate had just finished his second year at the University of Guelph, where he was taking a hotel and food administration program. He was about to do a co-op placement and his eventual hope was to get into hotel or restaurant management.

He had gone to Peru as part of Project Serve International. It was a humanitarian trip and he had already helped with a dental clinic, a head lice clinic, an immunization program and a construction job to build a staircase on the side of a mountain so residents could get to their houses more easily.

He was taking a break to go body surfing when a wave suddenly smashed him down onto the shoreline rocks. The impact broke his spinal column at the C4 vertebrae.

He has no recollection of the whole incident and only has his friends’ accounts of how he somehow seemed to know he had broken his back. Thanks to his previous lifeguard training, he knew enough to urge them to support his neck and treat it as a spinal cord injury.

The ambulance was taking so long in coming they had to take him to hospital in the back of a police car, all the time doing CPR since he had stopped breathing.

“I don’t remember being in the water or anything like that,” Cumpson recalled. “I remember coming from the community where we were working that morning and then all of a sudden my memory is gone.”

In fact, the first three weeks following the accident are still missing.

“I was on a lot of medications and I don’t remember getting back to Canada.”

Cumpson would wake up occasionally, not knowing where he was or what had happened.

The injury had left him with no feeling below his shoulders. He needed a ventilator to help him breathe.

He spent a total of 51 months in hospital — first at Kingston General Hospital and a couple of Toronto hospitals and finally at St. Mary’s of the Lake — before finally making it home last August.

In that time he managed to finish his university program online from his bed at St. Mary’s, doing 10 semesters in a row. When he needed to somehow take in-class courses, the University of Guelph let him be part of the class via Skype and had a student take notes for him.

“It was a whole new learning curve for all of us,” he said.

Cumpson just finished his final exam last week and will now graduate with his bachelor of commerce.

His mind is filled with all the things he wants to do next.

He doesn’t see limitations thanks to his disability; he just sees a requirement to do a bit of extra planning to make things happen.

“Every time somebody tells me you can’t do that, it just makes me want to do it more,” he said.

People had told him he wouldn’t be able to do any of the travelling he loves any more, but he proved them wrong by taking a trip to a Mexican resort this past January. He even had a meeting with the resort manager to discuss making the place more accessible.

A visit to the Mayan city of Chichen Itza, named one of the new seven wonders of the world, fit into his plan to see all seven.

“So I have got two down and five to go.”

The trip also exposed him to the cost of travelling with a disability. Finding accessible transportation down there cost him $1,000.

“They had a monopoly so they were able to charge whatever they wanted,” Cumpson said.

It came up again when he was planning a trip to a family reunion in Alberta this summer. Renting a regular minivan would cost $70 a day. Renting an accessible van would set him back $130 a day.

That difference doesn’t make sense to him, so he is into blogging now, advocating for people with disabilities.

He wants to make a difference in the lives of the disabled.

“That’s something that I strive to do, because there are too many people within the disability community who don’t have a voice. My goal is to change the view of people with a disability, showing that we are able to still live life to the fullest. We still have our own goals in life. They have obviously changed a little and we have had to readjust them, but we are mainly focused on doing what we love and are passionate for.”

His main goal is to open up his own restaurant. He already has a business plan and is looking for a possible location.

Cumpson is also considering starting up a consulting firm to talk to businesses about accessibility.

Each time he travels he learns something new on how to cope.

“It will teach me what I need to know about future travels,” he said.

“I can do whatever I want. It’s just I have to plan it out and figure out how to get from Point A to Point B. Once you get a couple of things under your belt, you learn real fast what to bring, what not to bring, what you need more of.

“That is stuff you only learn from experience. It is definitely a learning curve and there is a lot of learning to do. I have learned a lot in the last five years I never thought I would know in my lifetime.”

He has also been staying current on advances in spinal cord research, looking for anything that might apply to his situation.

It is all a way to keep himself busy, Cumpson said.

“I was like that before the accident. I didn’t have time during the day to just sit down.”

Cumpson was supposed to move into a house near Westbrook, built especially for him, last July, but health complications sent him to the ICU for eight weeks and pushed things back a month.

Under a Health Ministry program, he was able to hire his own staff of 10 to look after his needs 24-7. As his own boss, he could hire people who fit his personality, people with whom he would be comfortable.

He needs help getting up, bathed, fed and dressed, so he needs someone there all the time. A nurse comes in twice a day.

“It’s been a good time being at home, for sure,” he said. “It is just so much better to have privacy. My whole life is better.”

Key to staying positive is his support system.

It has been hard to always keep positive, Cumpson said.

There are times when he is alone and ends up staring at the clock or the ceiling, wondering why things turned out the way they did.

“There are some tough days sometimes. It’s difficult at times, especially at night when I am by myself and my brain just keeps running in circles. What helps me a lot is my support system.”

He knows he can call up a friend to talk things through, and he also reminds himself he is finally home and can now do what he wants.

“It just gives me my freedom in life,” Cumpson said. “It doesn’t confine me to one tiny hospital room for the rest of my life. It’s been a long road, but it has gone extremely well in the last eight months since I got home. Life has been much better, a lot more fun, a lot more things I am able to do.”

He can take his accessible van out with his staff to run errands, go to lunch or see a movie.

“I don’t like staying home and not doing stuff. I like to be active and getting out.”

But with being out in public come the reactions of people when they see him in his wheelchair.

It took a bit of getting used to.

“There are always going to be people who look and stare. Adults, I find, get really uncomfortable in those situations. It doesn’t really bother me much because I am just living my life.”

Kids, on the other hand, are often curious enough to approach him and ask what happened. He’s totally fine with that and prefers it to adults who are afraid of offending him.

Even worse are those who believe the disabled shouldn’t be out in public at all, he said. His going out is his way of advocating for other disabled people to do it, too.

“I am not sure where life is going to take me. Hopefully, whatever I do will reflect all my values and my mission in life because it’s something I strive to do: help others.”

Cumpson said living a successful life with an injury such as his just takes a different strategy.

“You can still live life if you have an injury or have some sort of challenge in your life,” he said. “You are still able to live it if you want to. There is a way to do it. There are ways to accommodate everything that needs to be accommodated.”

Hard work gets a paralyzed bride-to-be ready to walk down the...