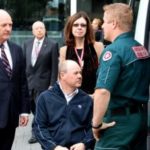 A study looking at reducing the severity of spinal injuries by reducing a patient’s body temperature immediately after an accident is entering a new phase amid hopes clinical trials will begin in WA next year.

Researchers believe the technique may ultimately make the difference between someone ending up having to use a wheelchair and being able to walk.

The research is being undertaken through WA’s Neurotrauma Research Program and the State Government is contributing $1 million towards it.

“When someone has such an injury it obviously causes a major impact on their future lives, on their families and what they are able to do physically,” he said.

The study is part of an ongoing national trial.

After an injury the spinal cord will lose about 2 million neurones, 14 billion synapses and about 12 kilometres of fibres every minute and it turns the spinal cord to mush.
-Professor Sarah Dunlop

UWA Professor Sarah Dunlop is the lead researcher in WA and said outcomes from the study could make an enormous difference to a patient’s quality of life.

“After an injury the spinal cord will lose about 2 million neurones, 14 billion synapses and about 12 kilometres of fibres every minute and it turns the spinal cord to mush,” she said.

“What we need to do is stop that damage and get the patient to hospital as fast as possible.”

“We will be aiming to do this on route to the hospital, both in the ambulances and the Royal Flying Doctor Service aircrafts,” she said.

“But initially we’ll be undertaking the study on early arrivers, those that get to the hospital within two hours. Any longer and you really have lost the advantage.”

Ms Dunlop said the high number of spinal injuries in WA was likely down to the size of the state.

She said patients in rural and remote areas would ultimately benefit greatly from the treatment, although the initial focus would be on Perth.

“Initially the first studies will be done on early arrivers, so the metro patients that get to RPH within less than two hours, then we will keep rolling backwards and outwards to longer times in rural and remote areas.”

It’s not necessarily just the difference between being in a wheelchair or walking, there are many other varieties and many other variances on that.
–Craig Parsons, quadriplegic

Benefits much more than just wheelchair or walking

Craig Parsons, aged 46, was 16 when he was involved in a motorcycle accident which left him a quadriplegic.

Mr Parsons was injured in Southern Cross, about 370 kilometres east of Perth, and he said it took a good nine or 10 hours to get treatment.

He said the cooling treatment would make amazing differences to those like him in the future.

“Having a spinal injury, being a quadriplegic, every little bit of muscle or use of your body that you can get makes a big difference,” he said.

“It’s not necessarily just the difference between being in a wheelchair or walking.

“For instance I’ve had hand surgery which I might not have had to have, certain parts of your bladder and bowels might work and they make quite substantial changes of quality of life so I think it will be amazing.”

Mr Day said St John Ambulance staff would also be playing a role in the research.

“They’ll be recording spine trauma on-site and helping develop systems to give patients the best chance of reduced spinal cord damage from the minute paramedics arrive.