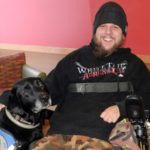 David Pollie’s favorite place in the world was in the woods, and being a quadriplegic since the age of 15 did not stop him from hunting whitetail deer.

The Grand Rapids man who overcame incredible odds to get back into the woods died unexpectedly last week. He was 32.

David, who raised funds for a special track chair to help his pursuit of whitetail deer, went into cardiac arrest at his home June 30 and never recovered.

“He’d not been right for a couple months,” said David’s brother, Jason. “He had a bad bladder infection. He was very prone to them.”

Jason, who served as his caregiver for 17 years, was getting him ready for a doctor appointment when he went into arrest.

“We finally talked him into it, he didn’t want to go (to the doctor), but said he probably should,” Jason said. “A lot of time when I’d roll him over it would rattle things up in his lungs, so I asked him if he was ready to go. And he said, ‘Yeah, let’s go.’

Members of the Pollie family gathered Wednesday to talk about the hard-charging man David had become.

David was 15 years old when his mother took the call that changed their lives forever.

While riding bikes with friend Kirt Gaylord at Ken-O-Sha Park, David hit a portion of washed-out sidewalk and crashed into Plaster Creek. He fell 6 feet and landed on his neck. 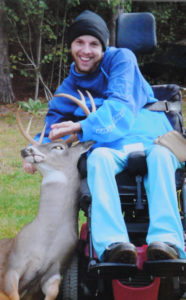 When they pulled him from the creek, his lungs were nearly full of water. His spinal cord and his C5 and C6 vertebrae were crushed.

“That’s the worst feeling as a mother,” Julie said. “We should have lost him then with how badly he was hurt. It was very devastating, it was like it took the life out of me.”

Gaylord went for help after Pollie had his accident, then got on a bus to check on his friend at the hospital.

“I don’t know what to say,” his best friend Gaylord said of David’s death. “It’s hard to describe how I feel right now. I don’t know.”

After more than five months recovering from his injuries, David began adjusting to his new life, paralyzed from the chest down.

Like he did after David’s accident, through the years, Gaylord would continually check in on David, especially when health issues arose.

“Kirt would drop everything to be with him,” said Lisa, David’s sister. “He never stopped being his friend.”

Gaylord, who met David after moving in down the road from him, struggled to talk while recalling their friendship.

“We rode the bus together and we got pretty tight from there on,” Gaylord said. “He was my best friend. You know how when you’re grown up and you have that one person? That’s who he was to me.

As David grew into a man, he strove to be more mobile outdoors.

In February 2015, David created a Go Fund Me page to help raise money to purchase an Action Trackchair, which would help him reach deeper into the woods to hunt and out on the ice to fish.

David shared his story with MLive readers, and donations poured in.

One man sent the family a check for $1,000, others gave in amounts from $20 to $100. The West Central Michigan Quality Deer Management Association presented him with a check for $1,000 at their annual banquet.

The online outdoors community in Michigan supported David’s efforts as well, with many donating and offering encouraging posts and messages to him through hunting Facebook groups.

An anonymous couple from northern Michigan used their income tax return to pay off the final few thousand dollars of the $12,000 total.

David was ecstatic after receiving his chair in late April 2015.

“It’s been one of the best things that’s happened to me in a long time,” David said at the time. “It feels like God is with me. That chair can take me places I haven’t been in years.”

That fall, David bagged a 9-point buck with his crossbow. After helping track it, he was able to drag the deer from the woods with his chair.

“I used to have to sit out there with a walkie-talkie, asking ‘Find anything yet?'” David said of the experience in late October 2015. “I could barely even feel it back there dragging it out.”

A life of care

Jason found his way in the world helping his brother live a daily life.

Catheterizations, clothes changes, doctor appointments, hunting preparation – the older brother helped with all of it.

“There’s one gentleman in his life that took damn good care of him, and that’s that man right there,” David’s father, Matt, said of Jason. “For 17 and a half years by his side thick and thin.

“They’d fight and argue and you’d separate them then it was, ‘Where’s my brother?’ That man did everything for him.”

Jason looked through tears, trying to find words to express his loss.

“I’ve always tried to help him do anything,” Jason said. “His hunting, that’s what he loved.

“I just went up to my dad’s (Wednesday, nearly a week after David’s death) and that was my first time going in the woods (without David).” 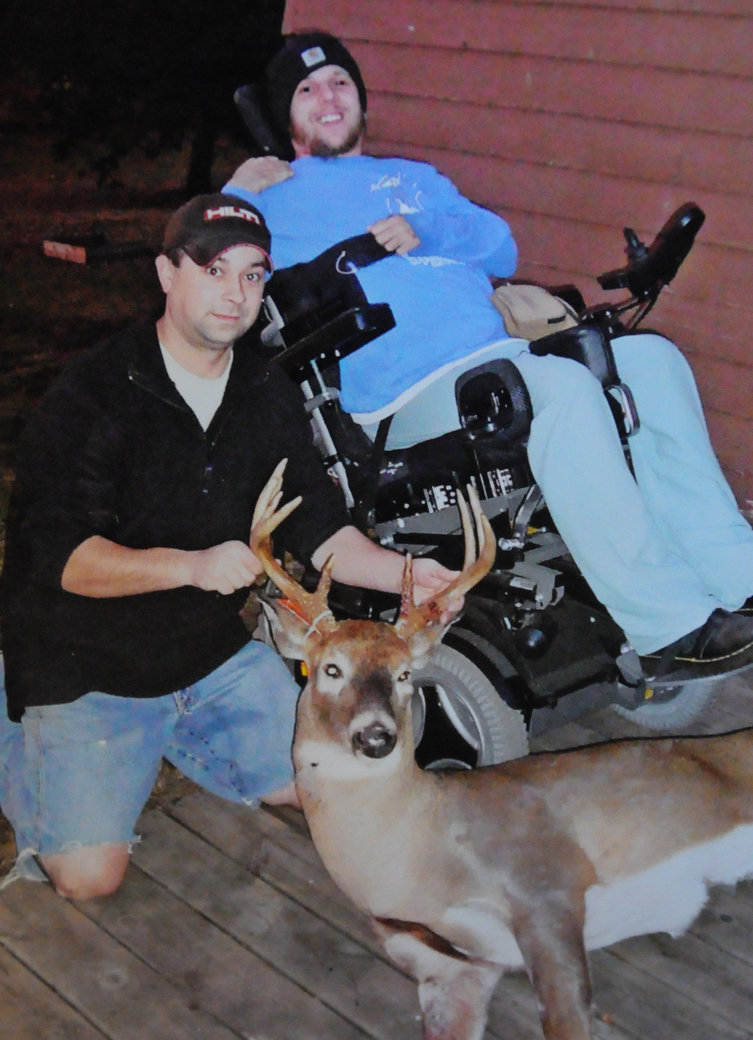 Jason and David were working on food plots to help bring in more deer. They’d just tilled up a large area and were preparing for the next step.

“That was pretty weird. I just wanted to see where we left off. It’s ready to be seeded, ready to go, but he’s not there.”

Jason’s days feel empty without his brother and all that went into caring for him.