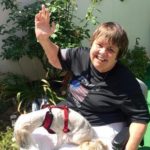 Well, consider this: It’s been 53 years since that accident, and at 76 years old Becky is not only the oldest quadriplegic in Utah, but one of the longest-living quads in history, not far behind Wally Dutcher, a 79-year-old Florida man who was paralyzed 60 years ago in a diving accident and is recognized by Guinness World Records as the world’s oldest living quadriplegic.

So not too shabby.

Maybe the most remarkable thing about the remarkable Becky Reeve story is the fact that of the thousands of talks she has given from her wheelchair these past 53 years — talks full of inspiration and hope and encouragement to groups large and small — she hasn’t taken a single cent in payment.

People have tried to pay her, always unsuccessfully. One person was particularly insistent, she remembers. Finally, Becky said, “If you’re going to write a check, write it to the Holy Ghost, ’cause I don’t want it.”

So that’s Becky Reeve, champion quadriplegic, bound and determined to wake up every day and praise God, refuse to complain, smile, help others and never stop moving.

That last one might sound incongruous for a person who by definition has virtually no use of their arms or legs, but for Becky it is the very foundation of her longevity.

When they lifted her off the ambulance on Nov. 17, 1962, and the doctors said there was no hope, when they said she would be a vegetable and should be institutionalized, when they said she’d never sit up, never stand up, when they said her life expectancy was 15 years, 20 tops, her answer was to just keep moving.

“Who would want to be a pea or a carrot?” she asks.

Easy? What Becky has endured makes climbing Everest in a Speedo look easy. It took her 18 months to move the knuckle on her right index finger. It was years before she could sit up in her wheelchair. It wasn’t until she was in her 40s that she could use braces to stand in a correct vertical position on her own two legs — because of a miracle worker God set in her path named Leighton Weber, who runs the Sit Tall, Stand Tall gym in Provo for people with spinal cord injuries.

“He works the soup out of you,” says Becky.

“Never ask why; who cares why?” she says. “The Savior didn’t let us down; we can’t let him down.”

She was on an LDS mission, 13 months into her 18-month term, when she broke her neck. It was early on a frosty November day when the car she was driving outside of Portales, New Mexico, on her way to a zone conference, spun sideways and rolled, throwing Sister Reeve, in the days before seat-belt laws — or seat belts, for that matter — 100 feet.

She’s been laid up ever since. Every day for 643 months or nearly 20,000 days, Becky notes: “I’ve needed someone to dress me, get me up, help me bathe, fix my meals, take me places, put me to bed. I have learned to accept and receive with grace and gratitude the service provided by the Lord’s special helpers.”

For her part, Becky gives back in the ways that she can, to herself and to others. It took her 10 years to get her bachelor’s degree at BYU, but she did it. As mentioned, she has spoken to countless groups in countless settings, as well as counseled one-on-one with people who have been injured and could use a reassuring word. “I can reach them because I’m in a situation worse than they’re in, in many respects,” she says.

She’s written several books, including one she published through Bookcraft in 1980, “The Spirit Knows No Handicap,” that sold more than 30,000 copies. Using the eraser end of a pencil, Becky has typed hundreds of thousands of pages of books, histories, newsletters and other correspondence, one key at a time.

That, in essence, is the story of her life.

“Every time a stone wall appeared, the Lord opened another door,” she says. “It’s been one miracle after another for 53 years. My life has been really full. What I’ve found is whatever odds you face, you’ll overcome them — if you trust in the Lord and don’t give up.”