Aday at a time: After tragic accident, Aday making strides in physical therapy 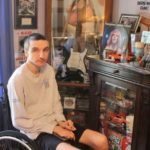 A hearty smile and a positive attitude are how Greg Aday approaches life each day. This outlook helps to guide Aday as he goes through physical therapy sessions for a spinal cord injury he sustained in an auto accident. Aday’s life changed after he had stopped at a convenience store in Glenn Heights to get gas for his Chevrolet S-10 pickup truck on March 22, 1998.

“Usually, if I had to get gas I would come to Waxahachie. But for some reason that I night, I said, ‘Well I am going to pull in there.’ I got gas. There is a service road that you drive down to get back on the highway. When I was getting back on the highway, there was some lady broken down off to the side. I don’t remember dodging her but evidently, there was a girl that was coming the other way and she was doing about 80 mph,” Aday said. “She is the one that hit me from behind. It knocked me off the service road. I went into a field through a barbed wire fence.”

Aday said fellow motorist came to his aid and helped get him out of the truck. The motorists then called 9-1-1. He was then taken to Baylor University Medical Center at Dallas. Aday said he could only remember a few details about the accident.

“I was hit, and I don’t know what happened. I lost consciousness. What is weird I woke up in the truck, and I remember my radio was still playing. I remember waking up, and my grandfather who had passed away was sitting there by me. He just said, ‘Everything is going to be ok,’” Aday said. “I remember waking up in the hospital. What was weird I remember there was some guy that had been in a really bad motorcycle (wreck), and the preacher was in there giving him his (last) rights. I remember hearing that and I thought that was for me.”

He credits the extended cab in the truck with helping to save his life and preventing additional injuries. The extended cab created an extra space between the front seat and the back seat.

Doctors diagnosed the injuries to Aday’s spinal cord as C6 incomplete. The C6 is the sixth vertebra of the spine.

According to the Mayo Clinic’s website, the ability to control your limbs after spinal cord injury depends on two factors: the place of the injury along your spinal cord and the severity of damage to the spinal cord. The lowest part of the spinal cord that functions normally after injury is referred to as the neurological level of your injury. The severity of the injury is often called “the completeness.” The Mayo Clinic website also states that if a person has some motor or sensory function below the affected area the injury is called incomplete. There are varying degrees of incomplete injury.

Since the accident, he has had one surgery that took bone from his hip and placed into his neck. He has also spent countless hours in physical therapy working to regain lost mobility. For the past three years, Aday has been going through physical therapy at React in Addison.

According to React’s website they offer one on one customized training programs aimed at restoring functional movement and independence. Some programs are tailored around active load bearing, strength training, a range of motion and flexibility training and coordination and balance training.

“The first hour they are laying you down and you are stretching your legs. You are doing stuff with your arms and your legs the first hour. Then the second hour you are on equipment and using equipment,” Aday said. “I go two to three times a month. If I can find someone to take me and of course I have to pay, and it is $100 an hour. I kind of budget my money and save my money. Last year I won a scholarship to go for a month for free.”

Some of the physical therapy Aday has had used a robotic suit. He has used the suit four or five times has taken around 200 steps in it.

“They have the robotic suit up there. You get in it, and it helps your legs move. If you try to pull back, it automatically stops. It is a $75,000 piece of equipment,” Aday said. “There are a lot of bugs in it because you can’t get in and out of a car in it. So they are trying to fix some of that. Some of them you can walk up stairs. There are lots of little bugs. What I didn’t like about it has a backpack with a computer in the back. It just hurt my back when I tried to walk.”

He said he prefers the regular sessions, which are about two hours and involve using a lot of different equipment.

Over the last few weeks, Aday has seen some improvement in his condition, which he believes is a result of the physical therapy he is receiving at React.

“A lot of this stuff is coming back to me. I have been getting better from about a week or two ago. My legs were shaking when I was in bed. It was like everything went away. The only problem is tightness in my hamstrings right now. I had back spasms really bad, and they are gone. If I laid in bed I would get one, and it would almost throw me out of bed,” Aday said. “I told my trainer up there at React. He said he has heard of stuff of that before. Once you start getting stuff back, he has not heard of a case where you lose it. I was afraid that I would get the stuff back and in a day or two later might lose it.”

Aday said his trainer Ryan Bachik keeps him motivated and keeps him going by providing him with encouragement. He also stated that laughter is important.

“I can move my legs, and the trainer can’t explain that because I am not supposed to be doing that anyways,” he said. “Now that all that tightness and spasms are gone there is no telling when I get up there next month because I have a three-hour evaluation to do. He (the trainer) said, ‘There are not telling what you can do.’”

He added that one of the biggest challenges he works to over staying busy.

“When I first got hurt I could not write. So what I did is I got celebrities address, and I would write to them. They would help me to learn to write,” Aday said. “I would set at home, and my mom would have to go to the post office all the time. We would get those big brown envelopes and send stuff to people. I have gotten some amazing autographs. I have gotten Ringo Starr. I used to get a Christmas card from Ringo every year. You would be surprised to see the people that I have gotten.”

Aday said next month he would have a three-hour evaluation to see how he has improved. He is going to continue working on stretching out his hamstrings. Before the accident, he was close to graduating with a marketing degree from Navarro College. One goal he has for himself is to find a job where he can work from home.

For more information about React go to its website at www.neuroreaction.org. People who wish to send Aday a message can search Greg Aday on Facebook.

Brain Implants Move at the Speed of Thought