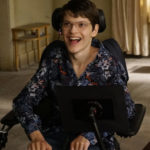 Micah Fowler, the star of Speechless, is just your average almost-famous high school senior with a disability rights mission.

Shortly before his high school prom, actor Micah Fowler found out ABC had picked up Speechless, the sitcom in which he stars as a nonverbal teen in a family of five. Weeks later, the 18-year-old New Jersey native moved to Los Angeles with his mother to start shooting and he’s had to make some personal sacrifices for this gig: He is missing much of his sled hockey season and much of his senior year (though he still plans to graduate with his class in the spring); plus, the somewhat social media–averse teen has joined both Twitter and Instagram to promote the show.

On Speechless, JJ grapples with teenage problems through the lens of disability: His high school provides him with a full-time aide who acts as his “voice,” but she’s an embarrassing middle-aged cheer ball with a hideous vest; his fellow students are phonily nice to him; and his mother (Minnie Driver) is comically overbearing. It’s human, and — unlike so many portraits of disability — it’s not a tragedy, it’s just a life.

Being one of so few disabled actors on TV — an even smaller slice of whom have roles in comedies — is weighty. “I feel like I have a great responsibility,” Fowler, who had to learn to use a communication board for the role, told BuzzFeed News on the Fox lot in Los Angeles in mid-September. Previously, he told New Mobility that “thinking about it stresses me out a little,” but less than a week before the Sept. 21 premiere of Speechless, he just said he was feeling excited.

Many of his New Jersey friends will attend a giant premiere party sponsored by Fowler’s father’s union on Sept. 21 — and he plans to FaceTime in. “Every single person I know in my life has just been so supportive and it’s just been a wonderful, wonderful experience,” Fowler said — even the Woodbridge Warriors sled hockey coach he’s forsaken for Hollywood.

On the hockey team, his jersey number was 13 — it’s his lucky number, he told BuzzFeed News, because he was 13 when he booked his first big job in the 2013 drama Labor Day. When asked why he hasn’t worked since then, Fowler took a long pause. “It’s just not a lot of roles,” he said. “And I just audition when I can.”

Speechless creator Scott Silveri has said that his charming sitcom avoids the tone of an issues show. But Fowler doesn’t shy away from the so-called issues: At the end of our interview, for example, he called out to ensure the website of the Cerebral Palsy Foundation was included in the story.

After all, Fowler’s role on Speechless is more than just a job. The position he’s in was perhaps most aptly encapsulated by his career goals. “I just really hope in the future that more disabled people will be on TV,” he said. “I also want to be in a Star Wars movie or a Marvel movie,” his call for a just world with access and representation for all hanging right next to a dudely superhero dream.