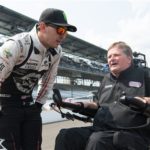 Paralyzed from the neck down since 2000, Schmidt is in line for a different type of victory at the speedway Wednesday, when he will become the first person in the nation to receive a restricted driver’s license for a semi-autonomous vehicle, according to the Nevada Department of Motor Vehicles.

Using only the motions of his head, his breath and voice commands, Schmidt will demonstrate his new driving abilities with a 2014 Chevrolet Corvette Z06 that was modified by Arrow Electronics.

Schmidt, a 52-year-old Henderson resident, could not be reached for comment. His professional driving career ended in January 2000 when he crashed during testing at Walt Disney World Speedway in Orlando, Florida. The accident severely injured his spinal cord and he was diagnosed as a quadriplegic.

A headset worn by Schmidt will largely control Arrow’s vehicle, a semi-autonomous motorcar known as SAM — coincidentally the same as the driver’s first name.

Blowing into a tube attached to the headset allows Schmidt to accelerate, while inhaling allows him to brake. Four infrared cameras mounted on the Corvette’s dashboard follow Schmidt’s head movements, allowing him to steer.

Arrow Electronics, a Fortune 500 company in Colorado, began developing the car for Schmidt in 2014. Over the past year, they’ve worked with the Nevada DMV to update regulations that would allow Schmidt to drive on state roads.

Over the past two years, Schmidt has demonstrated the vehicle at several high-profile events including the Indianapolis 500, the Long Beach Grand Prix in California and the Pikes Peak International Hill Climb in Colorado.

“Nevada is leading the nation in promoting autonomous and semi-autonomous vehicle technologies that can bring mobility and independence to people with physical disabilities, including our wounded warriors,” Nevada DMV officials wrote in a news release.