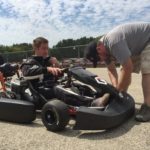 When he distances himself from the memory, and the wheelchair, Matt Maier is simply racing again. He’s independent and self-assured. His knowledge and experience are advantageous.

He slides his helmet on and the view becomes framed and familiar. This is what he knows: The ripping start-up noise of engines, the smell of the sun baking the race track, the open pavement beckoning.

What’s been new is the adjustment outside of this world, the one with specially adapted cars and physical therapy appointments and the loss of the use of half of his body.

The 31-year-old from Hartford was paralyzed while racing in a motocross event at the U.S. Cellular Arena two years ago.

But it is racing that has brought him back to what his doctors so earnestly want their paralysis patients to find in their lives: a new normal.

“I accepted the fact that, this is what it is,” said Maier. “And now I focus on what I can do. That’s pretty much how I’ve lived my life the last two years.”

Maier started dirt bike riding when he was 4 years old and racing when he was 5. His father, Gary, raced, so it was naturally a passion of Matt’s too. They were always on the track or in the garage.

“I didn’t really watch cartoons when I was a kid,” said Maier. “I watched the recordings of the races over and over and over. The feeling that I got on my bike – there was really nothing that could duplicate it.”

It’s not like he didn’t try. He played sports in middle school, but “the thing about team sports is you can have the best game of your life,” said Maier, “and still lose.”

He liked the ownership of his motocross races. No matter what the finish, they were his, and his alone. So his dad became his mechanic and got him the best equipment he could.

In 23 years of racing – 10 at the professional level – Maier had some highlights in his career. He took third place at the Green Bay Regional Arenacross in 2003 and third place at the Loretta Lynn Amateur Motocross in Minnesota in 2001.

He raced in the Arenacross series from 2006-’09 and landed top-10 and top-five finishes while he also worked as a metal fabrication welder.

He didn’t black out during his accident while racing at the arena in Milwaukee on Feb. 1, 2014. He remembers everything.

He was going through a part of the course that featured a series of small jumps close together. The fastest way through is to carry enough speed to go across the tops of them.

“I went in pretty normal speed and my front tire missed one,” said Maier. “So I dropped down into the bottom of one of them and it put me over the handle bars. I basically went chest first right into the peak of one of the jumps.”

He’d fallen before, but this felt different.

“I knew right away,” said Maier. “When I hit, I heard a loud pop and then felt a hot burning sensation through my legs. I had a lot of pain in my chest and back area. I couldn’t move my legs, I couldn’t feel my legs.”

The first thing he did was pull up his shirt to try to feel his skin.

“I was like, ‘This is weird, why can’t I feel anything,’ ” said Maier. “I could feel my hand touch my stomach, but my stomach couldn’t feel my hand.”

He had heard of people having these kinds of crashes before, and he started to recollect their stories as he waited for help. One of his childhood friends was paralyzed two years earlier, also in a motocross accident. But most stories usually went like this: Initially the rider would lose the feeling and then it would gradually come back.

“I was hoping and praying that it would come back,” said Maier.

Maier was rushed to Froedtert Hospital and was grateful for it, thinking of all the times he’d raced in remote parts of the country without hospitals so nearby. He’s sure the injury would have been worse if he hadn’t gotten to the Level I trauma center at Froedert and with the accredited doctors at the spinal cord injury center.

There, doctors such as Merle Orr, a physical medicine and rehabilitation specialist, treat spinal cord injury patients from motor vehicle collisions, falls and sports activities like diving and motocross.

The revelations from Maier’s X-rays and CT scans were awful. He fractured the T4 and T5 vertebrae in his spine near his neck, and his sternum.

Maier was paralyzed from the chest down, which was bad news, but strangely also hopeful news.

“No spinal cord injury is a good thing,” said Orr, who has worked at Froedtert for 11 years. “The blessing and the curse of Matt’s injury is, obviously he’s paralyzed … but he has full function of his upper extremities. He’s able to do a lot more than someone who was injured at his neck.

“That’s allowed him more freedom to be independent with his self care and his mobility with operating his own wheelchair, his own manual wheelchair.”

As Maier got used to getting around, he never lost interest in racing. But there aren’t a lot of options for 31-year-olds with unique racing needs. So Maier tried other activities.

He tried rock climbing and did well – but wow was he sore the next day, he said. He tried snow skiing at Wilmot mountain with Adaptive Adventures and it was fun, he said, but adaptive sports are very costly and sometimes you have to pick and choose.

He participated twice in the 5K at Festa Italiana, when it was a charity run to benefit spinal cord research, and he did it in his regular wheelchair – not even a racing chair – in 38 minutes, a pretty fast time.

He raced remote-control cars at an indoor track with Jamie Tennies, the owner of Trackside Hobbies & Raceway in Brookfield. He still spends time there as much as he can.

But there’s nothing was like getting behind a wheel and disturbing the peace on a track in the middle of nowhere.

“There was kind of a part of me missing, of not having that physical feel of that throttle and brake in my hand,” said Maier.

He got the idea after he tried go karting at Pole Position Raceway, a track in California, which had a kart that he could drive with just his hands.

“That was the first time I didn’t feel like I was in any disadvantage,” said Maier.

But it took months to reconstruct his own kart so he could drive it.

It has added hand controls. The left-side throttle is a personal watercraft throttle like you’d see on a WaveRunner and the right-side brakes are a silver grip just by the steering wheel.

He does no shifting on the Yamaha KT 100cc two-stroke single engine, but he has a computer screen on the steering wheel that illuminates his lap time, RPM and exhaust temperature so that he can get optimum performance while taking good care of the machine.

With Maier ready to go in his protective driver suit, neck device, helmet and gloves, Tennies helped lower him into the kart, which rests about 2 inches above the ground. And then he took off, winding around the course at the Badger Kart Club in Dousman.

“I think it’s great that Matt keeps moving forward despite his disability after his accident,” said Tennies. “It takes a special kind of person to move forward in life after such a loss of mobility.

“I know the go-kart racing and RC racing fills that competitive void.

“I met Matt after his accident when he came into my shop. Over the last two years Matt and I have become great friends and I’m always willing to help him with the karts or RC racing. His move forward attitude – despite being in a chair – inspires me sometimes.”

This is so important to adjusting to his new normal, said Orr.

“If you enjoyed driving, if you enjoyed competitive sports – those things shouldn’t cease to exist once you have a spinal cord injury,” said Orr. “Individuals who, prior to injury, were really active – those are the people that you really want to get as active as possible, because that’s been such a part of their life up to that point.”

Orr said Maier still has room to regain even more independence. Maier has been walking with braces in therapy. But he has accepted his new normal.

When friends ask him if he has any regrets about racing motocross, he answers like this:

“It’s been pretty common to have injuries as far as paralysis, TBIs (traumatic brain injuries) or even death,” said Maier. “It sounds kind of weird but I was always well aware that it could happen to me. Did I ever think it would? Not really.”

But dirt bike racing brought the friends he has into his life and created nearly a quarter century of memories. Racing made him who he is and continues to define him.

“That’s just how I look at it,” said Maier. “I can’t feel really too bad about myself. I can’t really get too bummed about it.

“And now with this go-kart racing, I feel like that’s going to be my perfect fit.”