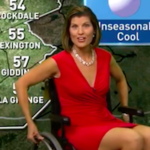 This week, hundreds of able-bodied people in Austin, Texas, will spend the day in a wheelchair to raise awareness of the accessibility issues people who use wheelchairs and other mobility devices face on a daily basis.

The initiative, known as Archer’s Challenge, was started by 20-year-old Archer Hadley, who has cerebral palsy. Archer’s Challenge began in 2015, after Hadley was frustrated by the lack of automatic doors at his school.

“Because I’m disabled, independence is a little harder for me,” Hadley said in a video about his organization. “One day, it was raining. As I’m trying to open the door, water is gushing on my back, I’m getting soaking wet. I tried this for about five to seven minutes and I got really frustrated. That was when I realized ‘Hey, I’ve been to a lot of public places that have automatic doors. Why can’t I do something about this?’”

From there, Hadley reached out to school administrators at Austin Independent School District to discuss swapping out the school’s regular doors with automatic doors. At $5,000 to $6,5000 per door, the school could not honor Hadley’s request for automatic doors. But Hadley wouldn’t take no for an answer, so he decided to raise money on his own by creating Archer’s Challenge. In the challenge’s first year, students at Austin High School could nominate another student to spend an entire school day in a wheelchair, with each nominated student paying $20 to participate.

“My last participants thoroughly understand why we need the buttons,” Hadley said. After last year’s challenge, Hadley and his peers raised more than $112,000 – enough money to install electronic doors in his high school and four other Austin high schools.

This year, the challenge runs from October 10 through the 15, with all money raised benefitting the Rosedale School, a school for children with special needs in Austin. And it’s not just student’s participating – educators; college students at the University of Texas, Austin; employees at Austin H-E-B grocery stores and Cabella’s outdoor retailers; local and state government officials and local news and media personalities each have their own designated day to participate.

On Monday, Chikage Windler, the chief metrologist at CBS Austin, did the channel’s weather forecast from a wheelchair. “This is my challenge to do the weather in a wheelchair,” Windler said. “As you saw, it’s a lot of coordination involved between moving the chair, pointing to maps and of course using the weather clicker.”

Beyond increasing accessibility in the Austin area, Hadley hopes his organization will foster a dialogue between able-bodied and disabled people.

Broken back can leave you homeless