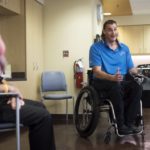 The Detroit Lions were facing the Los Angeles Rams.

At 50-years-old, Mike Utley can still tell you the sequence of events from that day verbatim.

He was in his third NFL season as an offensive lineman for the Lions. Life was good.

“It was the eleventh game of the season, first play of the fourth quarter,” Utley said. “(Former Lions quarterback) Erik Kramer comes back and gets us in the huddle and it’s a 7-step drop throw pass.

“At that time, we were behind the Rams point-wise, but we were better than the Rams on that Sunday.”

Once the ball was snapped and the play was underway, Utley remembers using a hands-on approach to blocking for Kramer until his assignment changed his position.

“I went to take his legs out to catch him and knock him so he has to defend me and not the ball. He put his hands on my shoulder, hit me and knocked me down,” Utley said. “Right then and there, I hit my head, I broke my neck and I knew I was in trouble.”

A burning sensation overwhelmed Utley’s body as he endured a spinal cord injury that eventually paralyzed him from the chest down. He would be carted off the field, but not before flashing the fans with a thumbs up for good measure.

Twenty-five years later, the big fella has regained use in his upper body. Rehabilitation has allowed him to use his shoulders, arms and hands.

His journey was used as a source of inspiration for a group of nearly 40 people Monday afternoon on 5 North of the inpatient unit at McLaren-Flint. 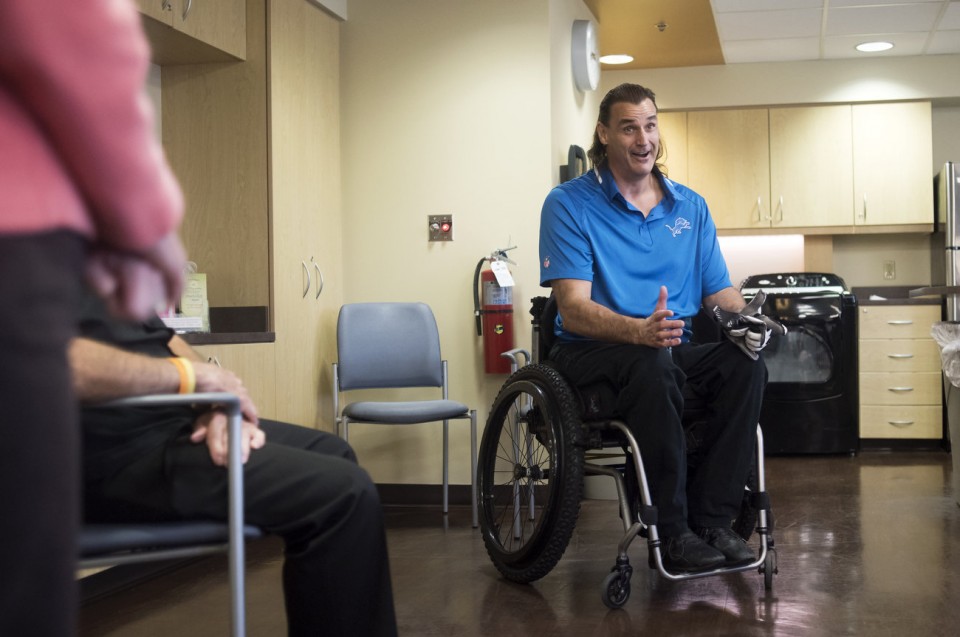 Utley spoke for 30 minutes to therapists and patients dealing with strokes, spinal cord, and brain trauma with his wife, Danielle, accompanying him from their home in Orondo, Wash. Weight training, hand-cycling, speed boating, shooting and other fun activities accompany his traditional rehabbing.

Some days are better than others but the weekly speaking engagements keep him energized.

“That changed my career, it didn’t change who Mike Utley was,” he said.

“Attack your rehab. Every single day, make it mean something,” he told the room. “Don’t go through the motions. It’s the same attitude that I brought there that I bring here. Same aggression, same drive to be the best.”

Stroke survivor Matthew Lewis could certainly relate to Utley. Six years ago, he collapsed with his health scare but rehabilitated at McLaren. His left side is still a bit weak from the stroke but he rides his bike up to 15 miles per day to stay in shape.

Lewis asked Utley: “What do you tell people when they say ‘I’m sorry about your injury?'”

“Thank you and then move on,” Utley said. “I say no, I deal with it every day and my job is to educate the person in the chair.”

“It’s in here,” Lewis poked his chest in response. “I tell people I’m not sorry and I’m happy to be alive. I’m thankful where I’m at.”

Flint native Bob Richmond is a Lions fan that actually watched the day Utley was carted off the field from the career-ending injury. Richmond’s left side is now weakened from a stroke he suffered a week ago. He listened to Utley’s speech next to his occupational therapist, Anne Brusich.

“That don’t mean you can get harder on me now,” Richmond whispered to Brusich in a joking manner.

The process is challenging for Richmond, but receiving that affirmation from Utley now gives Brusich the confidence he needs to push forward in rehab. With football no longer his mission, getting feedback from patients like Richmond gives him the same satisfaction of opening the hole for a Barry Sanders touchdown.

“Is it easy? The answer is no,” Utley said. “You can lie to everybody else around you but you can’t lie to the guy or the gal you see in the mirror every morning.
“It’s a habit and I tell people when you reinforce the good, more good comes out,” he added. “Winning is a learned behavior but so is quitting, so is losing and so is choosing not to do the right thing. Those are habits.”